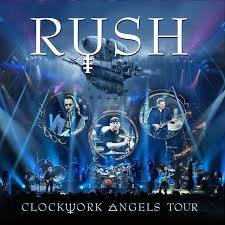 A friend of mine said to me—in response to my obvious glee that Rush’s Clockwork Angels Tour Blu-ray had just arrived in the mail—“it’s good to be childlike every once in a while.”  Well, maybe it was the reaction of a 13-year old trapped in a 46 year-old body.  Regardless, the reaction was sincere.  Rush!

Three thoughts and images (images as thoughts, and thoughts as images) come to me whenever I think of Rush.  Rush—brilliance.  Rush—inspiration.  Rush—comfort.  For thirty-three years, they’ve been all of these things to me.  Thank the Good Lord for that detention in seventh grade, and thank the Good Lord again for sharing that detention with Brad and Troy, the two guys who introduced me to Moving Pictures and, consequently, to Rush.  That was a heady spring.  I had also heard The Wall for the first time, the U.S. had just defeated the Soviets in hockey, and some idiots tried to kill the U.S. president and the Pope and came damn close to succeeding.  7th grade.  Prog Rock, Dr. Who, and Dungeons and Dragons.  But, most of all, Rush.

Maybe I never grew up.  These are still the things I love and share with my own kids (the oldest, now 14; he proudly wears a “prog rock—all else is noise” t-shirt; he and my twelve-year old daughter will be seeing that majesty that is Transatlantic in Chicago this coming February).

As Kev pointed out in his review of the same, there was a time when Rush fans could calculate an era by what live CD had been or was just about to be released.  All the World’s a Stage for the hard prog stage; Exit Stage Left for the melodic prog stage; A Show of Hands for the synth prog stage; and Different Stages for the return to guitar/alt rock stage.

After the horrific tragedies in Peart’s life, his purgatory and redemption (symbolically), we’re at Rush 2.0.

I would argue rather forcefully that this is a different band, a band that finally (yes, these guys are truly humble and always have been despite their driving ambition) realizes its more than a mere band.  You can see this realization dawn, finally (again, finally!) on them in Beyond on the Lighted Stage and on the Colbert Show.

They have nothing to prove anymore when it comes to acceptance.  They never really did, but they always thought they did.  They only have to prove their excellence.  And, to me, they’ve done this in spades.  As one of my favorite Rush writers, Rob Freedman, wrote about a year ago (and I quote this whenever I can)

The story of Rush is a story of validation. When the band first started out, the mainstream music establishment largely ignored them. Geddy’s voice was the brunt of jokes, Alex’s guitar playing got no respect, Neil’s lyrics were pretentious and channeled a kooky Ayn Randian ideology, and he played too many drums, all of them with the passion of a mathematician. Meanwhile, musicians and music aficionados loved them, so you had this great narrative tension. Now they’re nearing their 40-year anniversary, their old critics are in nursing homes, their fans are in leadership positions in business, science, government, and the arts, and they’re looked to as elder statesmen of rock.

Amen, Rob.  Amen.  On this issue, I can speak from some personal experience.  As I look back over my own life as a historian, a writer, and an academic, I can easily claim that Peart has had as much influence on my own thinking as any of the other greats I looks to for ideas and inspiration: Russell Kirk, Friedrich Hayek, Edmund Burke, Adam Smith, J.R.R. Tolkien, Ray Bradbury. . . .  A whole generation of us can claim to be Peart’s little brothers.  Like any older brother, Neil almost certainly will not agree with all of my own views, or with what I’ve done with his ideas.  But, then, Neil never—in any way—sought to conform the world.  One of the greatest things Neil gave to a generation was the advice to develop and hone what is best in each of us, whatever that best might be.

Not content to fade, Rush 2.0 has decided to shimmer with excellence.  I can’t help but think of Neil’s words off of Signals, “Losing It.”

Some are born to move the world

To live their fantasies

But most of us just dream about

Sadder still to watch it die

Than never to have known it

For you, the blind who once could see

The bell tolls for thee….

Rush is proving that greatness can beget greatness.  As I see it, Rush’s last three studio albums have done nothing if not prove this.  Vapor Trails, Snakes and Arrows, and, especially, Clockwork Angels.  While building upon everything from Rush to Test for Echo, the last three Rush albums come with a confidence, not of resignation, but assertion.  Nature has given us this time, I’ll be damned if I let it fly by unused and unappreciated.  Indeed, one can say with the last three albums, Rush looked at the world not just with confidence, but with gratitude.

So, when the band decides to release a live album for each tour, I can only shout “hooray.”  Give us as much as you can, Rush.  So many of us want to keep journeying with you in any way we can.

As with the previous tour, this one is a massive production.  Explosions, lasers, weird sets, and, best of all, incredible film clips add to the already stunning music.  The background story for the Clockwork Angels Tour film clips—an IRS agent looking for the Watchmaker is just outstanding, drop-down, gut-wrenching funny.  Geddy, Alex, and Neil appear as rather mischievous “G”nomes.

And, it’s just a joy to watch these guys perform.  They obviously love each other and what they’re doing.  In terms of playing, none of the members of Rush have ever been this good.  They are each in top form.  Watching each of them play guitar, bass, and drums is nothing if not humbling.  I hope I give as much in my lectures as these guys give in their playing.  Phew.

Musically, of course, what more could we want?  Knowing that they’ve been releasing lots of tour material over the last decade, Rush chose to play a significant portion of their 1980s material—stuff that’s not appeared on any of their live releases in a long time.  It’s worth remembering, however, that this is Rush 2.0.  They bring the sensibilities of the last three albums to the previous multitude of albums.  There’s not a dud in the live set, but songs that stand out in ways the originals didn’t: Force Ten; The Body Electric; and The Analog Kids.  Schnikees (again, apologies to Chris Farley), these are amazing.  Rocking, rocking, rocking.

It’s set two, however, that boggles the mind, the set that includes almost all of Clockwork Angels and—gasp!—a string quartet.  Phew.  Amazing.   So much energy emerges from the blu-ray in set two, it’s actually a bit wonderfully overwhelming.  YYZ is especially spectacular with the strings.

Bonus material on the blu-ray includes: Limelight, Middletown Dreams, The Pass, and Manhattan Project, as well as all of the movie clips from the tour and some documentaries.

For me, this is pretty much perfection itself.  33 years of loving this band comes down to this 3plus hour set.  Yes, Geddy, Neil, and Alex, I could never thank you enough for the confidence you’ve given me, the excellence you’ve shown me, and the hope you embody.  Whether you ever expected to get here or not, you are the embodiment of the best of rock, you are now the elder statesmen of culture.  You have persevered, and we have as well!

May the journey long continue.