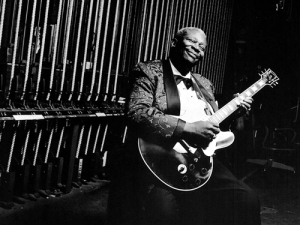 Saturday night (May 31), I had the great pleasure and honor to see the King of the Blues, Mr. B.B. King, live at the Rialto Square Theater in Joliet, Illinois. As soon as I found out that he was going to be doing a concert so close to my house, I knew I had to go and that this would be a once in a lifetime experience. Boy, was I right. At 88 years young, Mr. King still sings with such effortless power, it astounds me. His playing on the guitar is simply incredible. As my Dad described it, B.B. King doesn’t just play the guitar, he makes the guitar sing. He brings out the best that the guitar has in it, in a way that only a select few people, such as Eric Clapton or Buddy Guy, are able to do.

The concert itself was around two and half hours long, but the first hour of that was a sort of “warm-up” by Anthony Gomes and his band. Gomes, originally from Toronto, is a very skilled guitarist, but his style of playing created more “noise” than anything else. He did not have the finesse or style to make the guitar sing and come alive. It was clear that he was trying to show off. The best part of that segment was when he brought Ronnie Baker Brooks onstage to play. Brooks is a Blues musician local to Chicago, and he is the son of Lonnie Brooks, who was rather famous in Blues circles in his own right. Both Ronnie and his father were invited on the stage by Mr. King later on in the show.

After Anthony Gomes and his band were through, the stage hands came out to get everything ready for B.B. King and his band. His band came out first and each member demonstrated their technical skill in a very jazz-like fashion. The band had four guys on trumpets, horns, flutes, saxophones, etc., a drummer, a keyboardist, a guitarist, a bassist, and of course B.B. King. When he came onto the stage, supported and surrounded by rather large security guards, he received a well-deserved standing ovation. Mr. King made his way to his seat, and he was given his guitar and microphone, and the magic began. You could tell that he really enjoys what he does. At 88 years old, there is nothing keeping him touring other than sheer love of the music. He was very thankful to the adoring crowd for their applause and respect, and he made sure to introduce each member of his band.

Once he settled down and began to sing (both vocally and through his guitar), I was simply amazed. His voice had such power that was simply effortless for him. Once he began to play his guitar, it was pure pleasure to listen to. His ability to allow the clear sound of the guitar to take over is incredible. While Gomes was clearly using all sorts of effects and pedals for his guitar, Mr. King kept it simple and just let Lucille do all of the work. As he played his way through several of his hits, such as “Thrill is Gone,” “Rock Me Baby,” and “Why I Sing The Blues,” he continued to stop and share stories and interact with the audience. At one point, he claimed he forgot the lyrics to “Why I Sing the Blues” during the song. While some people in some places might be mad at that, it was clear that most of this crowd had nothing but respect for Mr. King. Just being there seeing him perform was enough. As the man who revolutionized the Blues, and rock and roll, he really is a legend, and he commands respect by his very presence, in a way unlike any other performer I have seen.

After several songs, Mr. King’s security guys came out and handed him stuff (like guitar picks and other trinkets) to throw out to the audience. As a crowd assembled down front, someone held up a poster. Mr. King glanced over at it and made eye contact with one of his security guards, who then went over, took the poster, and brought it to Mr. King for him to sign. I found that totally awesome, that he would take the time to do that at the end of his concert. As everything was winding down, B.B. King said several times how he wished he could stay and play all night, and I really wish he would have. When he got up and made his way off the stage, I realized that I was watching a legend and a living piece of history walk away. It was truly an honor and a privilege to see B.B. King play live, and if any of you ever have the opportunity to see him, I highly recommend doing so. You will not regret it.