Squonk Opera is a performance art company from Pittsburgh, Pennsylvania (USA).  If you are not familiar with them, you might expect that they are named for the imaginary creature (also supposedly Pennsylvanian) portrayed in a Genesis song.  You would be disappointed, though, as the band claims the name derives from the jazz term “squonk fest,” used in reference to some saxophone performances.  Nevertheless, Squonk Opera’s music does display some prog influences and sensibilities, and they are worth checking out. 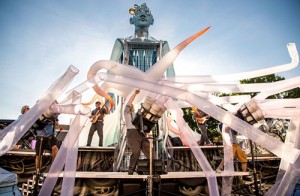 Wikipedia refers to them aptly as “a group of interdisciplinary performing artists.”  They’ve been around since the early 1990’s, and among other distinctions have competed with some success on America’s Got Talent (though the judges ultimately did not seem to get what they were up to).  Their mix of audio and visual presentation could invite comparisons to the Blue Man Group, but I find them much more relaxed and refreshing in some ways.  The Blue Men are a bit more “McDonaldized” in the sense elaborated by sociologist George Ritzer, with an implicit aspiration to a total quality-control-hold on performer as provider and audience as consumer.  To be clear, I’m definitely not saying that I don’t like Blue Man Group.  They are good at worst, and irresistable and profound at best (and I do eat at McDonalds sometimes).  But Squonk Opera retains a combination of serious artistry and relaxed fun, a vulnerability and intimacy with the audience of which Blue Man’s ethos requires avoidance.

Pneumatica (2014) is Squonk Opera’s latest CD release, with music from their latest stage production.  Why would one only listen to the music without the visual elements?  A good question.  I wouldn’t really want to listen to Blue Man’s version of “Baba O’Reilly” without the visual, for example.  And the visuals associated with Pneumatica go beyond the performance one can see in a video.  (Their 20 page “Workshop Learning Guide” is delightful!)  But considering the music itself is interesting and rewarding.  Their interplay of gravity and levity, both seen and heard in the Gesamtkunstwerk, is embodied just as clearly in the deft movement between and synthesis of prog, classic rock, classical, pop, Celtic, marching band, and other influences.  I sometimes detect a rather strong minimalist current (as in Glass and Reich), of the sort one hears in early XTC, and it works well (to my ears) with Squonk’s dramatistic approach.

I’m not convinced that Pneumatica as CD/album is something that I would return to for multiple listenings, though I think that there are proggish listeners who would disagree.  For my part, I find the earlier CD, Mayhem and Majesty (2010), more fascinating and “durable,” probably because the minimalist element is most prominent and effective there.  But remember that this judgment is rendered upon the music, artificially divorced from its performative context.  Squonk Opera’s work is best felt and seen, not just heard.