The Lamb is ONE, right?  It’s a unified, singular work of art.  It’s a “concept album.”  There is a narrative, there are dramatis personae.  It is a MANY in some sense, since there are two albums’ worth of songs (plural).  But that’s secondary, is it not?  It’s “beside the point,” perhaps?

But each song is ONE.  There’s a richness, an inexhaustible palpability, to “The Colony of Slippermen,” or “The Lamia,” or (my favorite for richness) “Counting Out Time.”  A cover of a single song can bring out nuances of the song that are not as noticeable in the original.  It can 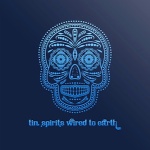 be a new Look (regard), like Tin Spirits’ new Look at “Back in NYC.”

But does it sort bother you, at least a little bit, to hear a cover of a single song from The Lamb?  Do you find yourself – or better, perhaps, a part of yourself – wincing when you talk to someone familiar with “The Carpet Crawlers,” but not with the whole Lamb?  Does it feel a bit like an ALL, which is in danger of dissolving into a NOTHING if it is taken apart (whatever “taken apart” might mean here)?

Back in Look #13, I suggested (with much wincing on the part of certain parts of myself) listening to The Lamb “on Shuffle.”  (Did you do it?  If not, it might be worth reflecting on why you didn’t.)  Doing that would have been one way to “take apart” the ONEness of The Lamb, and to experience it as MANY.  It might lead to finding some new ALL in that MANYness that is not NOTHING.  (I like multiple negatives too much.  I need to watch that.)  The answer is “yes, but…”  I don’t see that shuffling must lead to the “taking 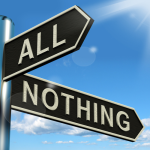 apart” that matters here.  The Look here is not simply equivalent to that prior Look, though they may be related.

That prog fan over there?  He says that “Yes” after Going for the One is no longer Yes.  This one over here?  She says that “King Crimson” beginning with Discipline is no longer King Crimson.  Even more to the point (there’s a point?  ONE point?), that one way back there?  I can’t tell from here whether it’s a he or she, but that one says that Genesis began to decline after Gabriel’s departure, and eventually got so bad that it somehow negated what was so good about the early stuff.  It’s as if the existence of early Genesis is somehow ontologically negated, canceled out by the decline.  It was a ONE that was also an ALL.  It couldn’t continue to enjoy a place, even in history, when it was no longer an ALL.  It became a NOTHING.

A rather extreme example, I know.  But think and listen:

What if ONE and MANY are not opposites?  (They’re not, you know.)

You’ve probably been told at some point: “It’s not an all-or-nothing thing.”  You may already know that few things are all-or-nothing.  (I suspect very few.)  But what if ALL and NOTHING are not opposites either?

A teacher of “great figures” (philosophers, for example, like Plato, Aristotle, Aquinas, Kant, Hegel) runs into a rough equivalent.  Is the “thought” (how odd, when what we have are texts) of this or that author ONE?  Is it somehow undermined or refuted if there is some clear, evident, obvious (to whom?) way in which some particular “part” is wrong (mistaken? bad? evil?), does that reduce its ALL to NOTHING?  If it is a MANY from which we might (perhaps inexhaustibly, if it is indeed a “great” author) draw, does that mean that there cannot be a ONE there, or an ALL?

A favorite work of art, including a musical work, presents the same sort of questions.

Well, this is no complicated thing at all, one might think.  Of course you can listen to The Lamb as a ONE or as a MANY.  You may have already done this, listening now more as a ONE, then as more of a MANY.

Ah, but now think about those pictures you see, often associated with “Gestalt Psychology,” where it could be seen as a rabbit or as a duck.  You could see two faces, are a vase.  You could see a young woman or an old one.  Seeing a Gestalt, a configuration (roughly), involves something like the flick of a perceptual switch.  Once you know it’s that kind of picture, you can go back and forth between the possibilities at will.

Can you see both at the same time?

Listen to The Lamb, and try to hear both ONE and MANY, at the same time.  If you find yourself realizing how hard this is, it will be a sign that you’re on the right track.

Oh, and for the bonus round:  Try to hear both ALL and NOTHING.  I suspect that’s part of what’s needed sometimes to get beyond