Though NAO’s Sam Healy is not religious in the least, there might be something culturally reflective here.  I have no idea, frankly.  But, I’m sure I’m not the only who imagined the Jewish creation story when reading the title of NAO’s third album.

Whatever the origin of the title, I was actually prompted to re-reveiw the album because of listening to the NAO compilation, LIBRARY STRIKES THE LIBRARY TWICE.  Listening to  the three tracks on that “best of,” taken from THE THIRD DAY, and listening to them out of context gave me an entirely new perspective on the 2014 album. 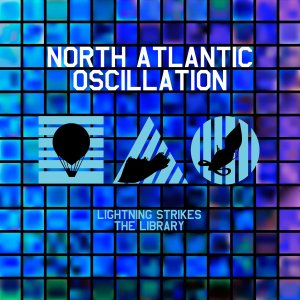 NAO’s music always intrigues me, but it usually only grabs me after many (meaning, as in sometimes over a year) of listening.  Don’t get me wrong, I love NAO’s music whether I get it or not.  It’s infectious without being insipid.  It’s intelligent and moody as well as catchy.  Something only a very few bands in rock history have been able to capture.  As to the second album, I’d been listening to FOG ELECTRIC consistently for well over a year before I finally got what was happening.  Then, it’s as though an entirely new album appeared before me.

The same thing has happened with THE THIRD DAY.  I’m only now—I believe—understanding it and realizing it’s not just ear candy, it’s ear candy with layers and layers of depth and meaning.

The opening track, “Great Plains II,” has no real beginning.  Instead, it appears on the album as it  fades and tunes in, and the listener realizes he’s coming late into an already playing piece of work.  Genius, really.

Nothing if not existential in lyrics and tone, “Elsewhere” is track two, sounding as much like an NAO track as it does one of Sam Healy’s SAND tunes.

Track 3, “August,” has an ELO feel and sensibility (but without being cheesy).  “August” is heavy and dense, and there resides much gravitas within every word and every note.  Nothing has not been tinkered with, and with so much going one, swirling, rotating, and hovering, this is pop in the best sense.  Anchored by a steady Lee Harris kind of drumming, strings, woodwins, whistles, and other instruments only add layers to an already dense song.

“A Nice Little Place,” the fourth song, perplexes and intrigues me.  It’s a quiet, eerie, haunting, Bradbury-esque kind of song that would have fit well on SPIRIT OF EDEN or LAUGHING STOCK.  Lots of small noises and Sam’s plaintive vocals intertwine to make this beautiful and imagistic song.

With track 5, “Penrose,” NAO moves back into a kind of early to mid 1980s New Wave pop.  Imagine a Blancmange or even a pre-1984 Simple Minds instrumental piece.

There is a slight, short break in the wall of sound between tracks 5 and 6, “Do Something Useful.”  But, when six begins, a whole new Wall of Sound begins.  The ending, the silence, and the beginning all remind me of  that exciting moment when we turned over the vinyl–the only control we lovers of music had over the technology of the 1980s.  We could pause or we could rush.  We could take a break or we could continue with full immersion.  I was usually an immersion kind of guy.  This new wall of sound from NAO is spacy and alien, full of disparate voices, some confidence, some in distress, all talking over and around each other.  Finally, just before the two-minute mark of the track, the song becomes a recognizable song.  Still awash in keyboards, but now armed with drums, percussion, and Sam’s mysteriously sublime and enticing voice.  At the four minute mark, the song becomes something else—again.  Something entirely different.  An earnest, almost quiet Zeppelin-esque guitar.  Overall, the song radiates a comfortable type of nostalgia.

With just the briefest of pauses, we jump immediately into the most driven song of the entire album, the masterful and Radiohead-esque “Wires.”  This is a song that finds the video making what is already astounding even more so—a confused but determined Wall-e type computer trying to find his own path in a sanitized utopian machine.  The genius of the song, though, comes from the lyrics.  With so many defined paths and so many things already taken care of in our corporatized and bureaucratized conformist society, all things that really matter are always on the tip of tongue, at the edge of our mind, but just out of reach.  That is, our own knowledge (or inability to grasp it) creates even more confusion and alienation rather than a solution.  A genius song.  It’s radically different than anything else on the album, but it’s most certainly not tacked on.  It’s been earned by this point in the album.

As if to remind us just how weird the song is, however, track 8, “The Pines of Eden,” takes us down to a very quiet—if still intense—level with only guitar, percussion, and some background noises as Sam gently sings as if in a lullaby.  And, as a lullaby, it offers the hope that all will be well.  As the title suggests, there might be a religious theme here, too.

Track 9, “Dust,” comes the closest to the (relatively) straight forward pop of NAO’s first album—meanings it’s damn fine pop.  At least the first four of its seven minutes are straightforward pop.  The middle part of the song—dominated by piano and Sam’s quiet descriptions—is haunting to the extreme.  By the 5:50 mark, we’re back into the song, full force.

As the lyrics of the song reveal, we have now made our journey and we’ve arrived at our final destination.  Yet, it’s not what we assumed it would be, and we realize that what we carry with us might not be enough to bring us safety into this new world.  As such, the trajectory of NAO has been nearly perfect since the arrival into the world of its first album.  We’re now on the third album.  No one—but especially the perfectionist Sam Healy—would want just repetition.  After all, we want true progress, even if the price is outrageous and exorbitant.

With no pause in the music, track 10, aptly entitled “When to Stop,” has a joyful, carnivelesque innocence to it.  We might very well be watching our children riding the horses of a colorful carousel on a glorious spring day.  In the second half of the song, bright colors emerge from the music, but an anguished voice appears in the background, thus ending the album with much appreciated uncertainty.  No great resolve, no major questions.  Just the immense joy of existence mixed with a whole lot of chaos.  Much like life itself.

I’ve written it before, and I’ll write it again.  NAO is simply genius.  I eagerly await album no. 4.