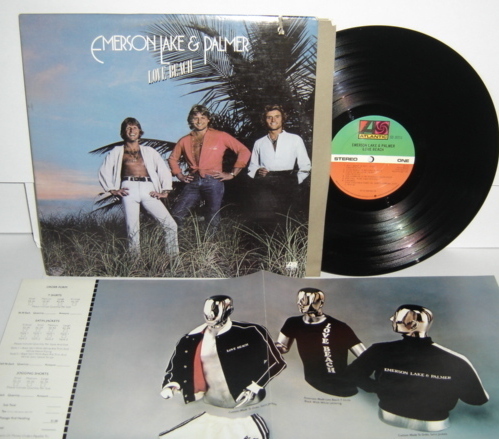 My first reaction to Love Beach (purchased at the Grosse Pointe location of Harmony House, after hearing “The Gambler” on Detroit rock radio in November 1978) wasn’t about the music.  It was about the merchandising insert included with the first pressing.  I think my actual thoughts were something along the lines of, “They’re selling satin Love Beach jogging shorts?!?”

Yes, they were.  Along with Love Beach t-shirts and custom made Love Beach satin jackets.   Something was obviously wrong.  Though I was in my last year of high school, I was still too naive to understand what it signified — a last attempt to squeeze income out of a wounded band and a tarnished brand.  Then I heard the album.

Before the Internet, I couldn’t know that, dispirited after their grueling Works tour, Keith Emerson, Greg Lake & Carl Palmer wanted to pursue the solo careers they’d half-heartedly attempted after Brain Salad Surgery.  That Atlantic Records president Ahmet Ertegun had held them to their contract for another trio album, sending them to the Bahamas to get on with it.  That Emerson’s resistance to a Side One of short radio-friendly songs had been matched by Lake’s indifference toward a proposed concept piece on Side Two. That everybody got the job done as fast as possible and bailed out, leaving Atlantic to market a new image of ELP as hedonistic beach boys, complete with Bee Gees-style open shirts and well-oiled chest hair.

Having bought the group’s entire catalog since my Works Volume 1 epiphany a year before, what I did know was that Love Beach was half-baked stuff, a mixture of good and bad ideas executed with some panache but little conviction.  Due to both the completed product and the realities of the market, it didn’t stand a chance of generating serious sales or radio play; it vanished from the charts faster than any previous ELP album, scuttling plans for a farewell tour and any enthusiasm from Atlantic toward potential solo contracts.

Lake’s four songs (all co-written with Peter Sinfield) ranged from pedestrian (“All I Want Is You” and the title song) to grotesque (“Taste of My Love,” “For You”), with the delicacy and subtlety of previous ballads completely forgotten in the quest for a hit single. “Taste of My Love” exemplifies everything wrong with the album: the lyrics are hilariously overwrought, comparing the hero’s lovemaking in quick succession to a stallion, dynamite and a rocket; Lake’s ludicrously dramatic vocals completely oversell the steaming pile-up of mixed metaphors; Emerson and Palmer load on an excess of synthesized hunting horns, quasi-Oriental bamboo flutes, tympani and vibraslap.  The material is so untypical, unambitious and slight that even the overkill isn’t enjoyable.

Closer to the group’s wheelhouse, the modified blues of Emerson, Lake & Sinfield’s “The Gambler” generates excitement with fresh tone colors (electric guitar and harmonica, both contributed by Lake), a slippery synth solo, and a call-and-response gospel bridge.  “Canario,” taken from Joaquin Rodrigo’s guitar concerto Fantasia para un gentilhombre, is an upbeat classical adaptation in the mode of the ELP/Copland “Hoedown”; for once, it sounds like the trio is having fun, with Lake contributing more solid electric guitar to complement Emerson and Palmer’s typical frenetic groove.

Side two held the grand finale, Emerson’s “Memoirs of an Officer and a Gentlemen,” with lyrics by Sinfield (who took the job on the condition he wouldn’t have to co-write it with Lake).  A  melodramatic tale of a English soldier who comes of age during World War II by loving and losing, the concept had potential.  Musically, there are some glorious moments: the pensive “Prelude,” the acoustic-based, lyrical “Love at First Sight” (kicked off with a Chopin quote) and the pleasantly atypical “Letters from the Front,” anchored by Emerson’s only recorded work on Fender Rhodes piano.  Again, Lake’s vocals let the side down by trying too hard, leaning into overcooked emotion at the expense of intimacy.  And after the narrative’s melancholy close, the suite just … peters out, fading away in a mist of synthesized orchestration, deprived of a climax that would suit the latent power of the material.

In 1978, Love Beach failed in every possible way: with ELP’s fan base (“shocked and dismayed” is probably understating the reaction), with the broader market, with the corporate bosses, and with the band itself.  At a distance, and given that it wasn’t the ultimate end of Keith, Greg & Carl’s adventures, the album’s latest re-release feels more like an oddly amusing curio.  Nicely remastered to bring out the saturated musical colors, complemented by alternative mixes that bring out the possibilities in weaker tracks and rehearsal tapes that showed the trio still able to shred in the studio, it stands as the puzzling footnote to the band’s period of peak popularity and influence.   Another upside: this time around, nary a sign of satin jogging shorts.