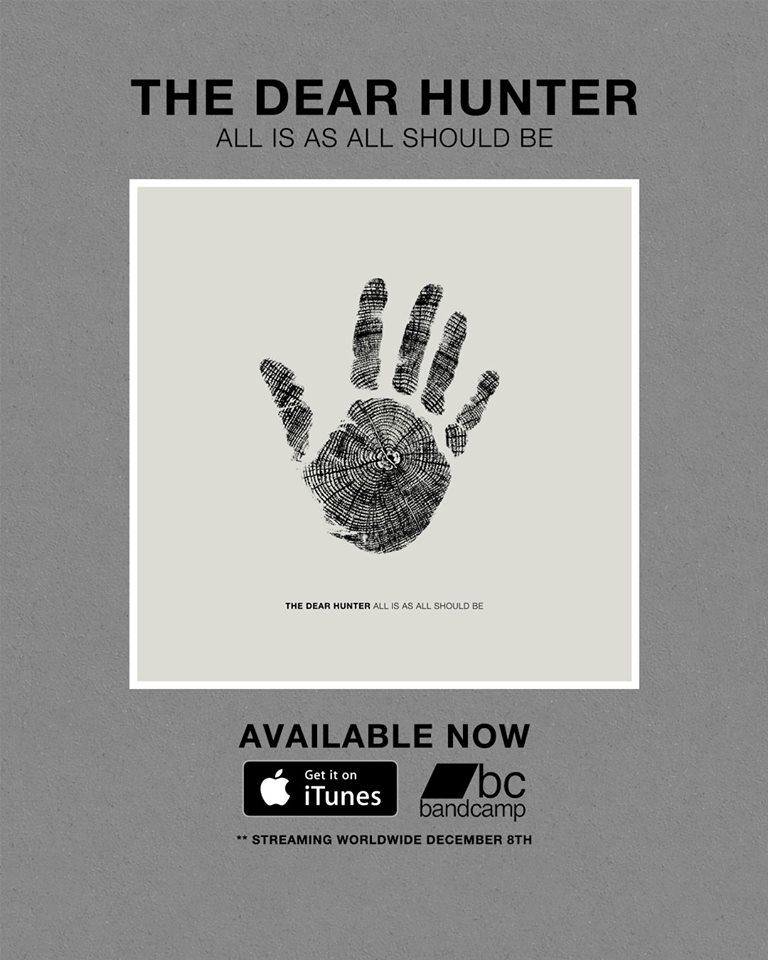 The Dear Hunter first caught my attention when I saw them open for Coheed & Cambria and Porcupine Tree in 2009.  Imagine a group of hardcore punk rockers who’ve raided their parents’ record collections, only to be captivated by the Beach Boys and Queen records they’ve found.  It was hard-driving, deeply melodic, richly textured, over-the-top melodramatic, way impressive stuff.

Since then, I’ve happily followed TDH’s career, enjoying their Acts I-V concept albums, but more drawn to unrelated projects like their Color Spectrum EP set.  This new EP, their first self-released project, distills what makes Casey Crescenzo and company’s music special into just 25 minutes and 6 “all killer no filler” tracks.

As always with these guys, if your attention drifts, you might think you’ve accidentally stumbled into a completely different song.  For example, the agile Latin groove and warm, open-hearted verses of opener “The Right Wrong” slam directly into a stratospheric chorus of shreddy vocals, simultaneously putting the hardcore hammer down, then morphing into and out of a giddily rocking bridge in a flash.  “Blame Paradise” encompasses a seriously badass beat, a off-kilter opening riff, call and answer vocal patter over surf-music guitar, an unstoppable harmony chorus, a spooky instrumental bridge, an ominous vocal/synth duet, and an atonal dead-stop finale.  Whew!

“Beyond the Pale” slows things down in a riveting ballad that piles on the rich vocal harmonies, unexpected harmonic shifts, and synthesized strings and percussion.  When it can’t do anything else, it collapses into stasis, then seques into “Shake Me (Awake),” an utterly glorious Brian Wilson pastiche for the emo generation (with Freddie Mercury-like rhymes and a vaudevillian softshoe bridge to boot).

“Witness Me” aims true at mid-tempo existential yearning, telling its tale through multiple vocal characters, the verses downshifting into a gorgeous synth turnaround before the theatrical chorus, the hardcore holler of the bridge, and the “keep dreaming” electronica-laced fade-out.  The closing title track starts softly, climbing through muted verses to a floating chorus as a gently funky beat gains strength.  Edgy, ascending guitars build to a big choral climax  — only to wrap around to the song’s muted beginning, with a final half-verse just hanging there, suspended in mid-air.

And here’s the thing about The Dear Hunter’s music: as wildly disjunctive as all this sounds, the whole EP flows brilliantly from start to finish.  Every new element is a surprise, even a shock, as it kicks in — but almost immediately it feels inevitable and right.  This is great progressive punk-pop, made with open-hearted emotion, craft and commitment.  When Crescenzo sings and TDH locks in around him, they’ll sweep you along with them, no matter how bumpy the ride gets.

All Is As All Should Be is available for download now on ITunes and Bandcamp.   I completely missed the pre-order for physical formats (vinyl and CD), which are already sold out; here’s hoping a second pressing follows soon!  The EP is released to streaming services on December 8.

One thought on “Rick’s Quick Takes: All Is As All Should Be by The Dear Hunter”