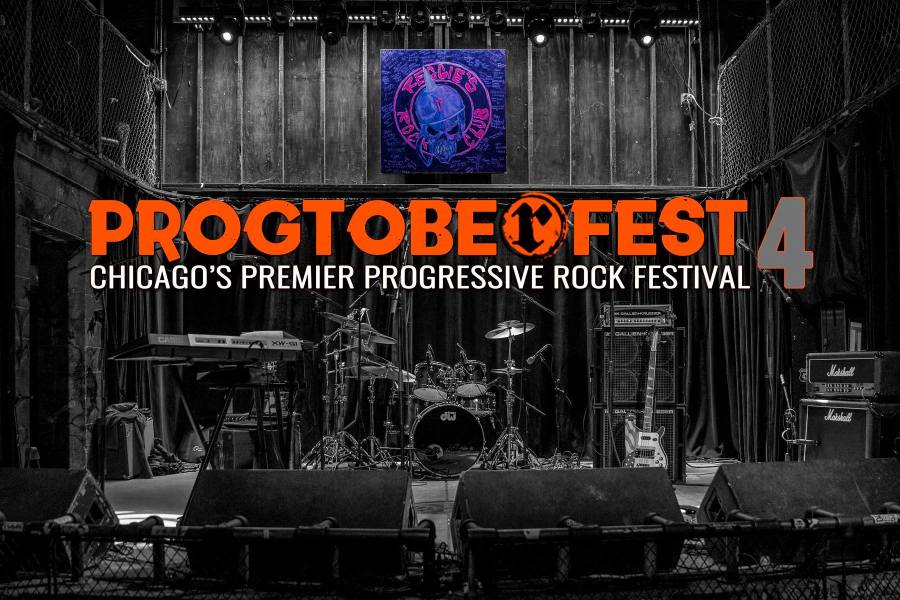 Due to the delights and demands of daily life, my second annual visit to Chicago’s Progtoberfest couldn’t be as extensive as last year’s three day blowout. Originally, I was only going to take in Sunday, in order to experience Soft Machine’s 50th anniversary tour of the USA. But an unexpected schedule opening let me check out the Saturday night action at Reggie’s Rock Club on the Windy (and Sleety) City’s south side.

One of the reasons I added Saturday night to my itinerary was the return of North Carolina’s ABACAB – The Music of Genesis. This ambitious tribute band charmed Progtoberfest 3 with a complete run-through of 1977’s live Genesis album, Seconds Out. This year, the brief was even more demanding: celebrating Genesis’ 50th anniversary by counting back down the years a la Rush’s R40 tour. 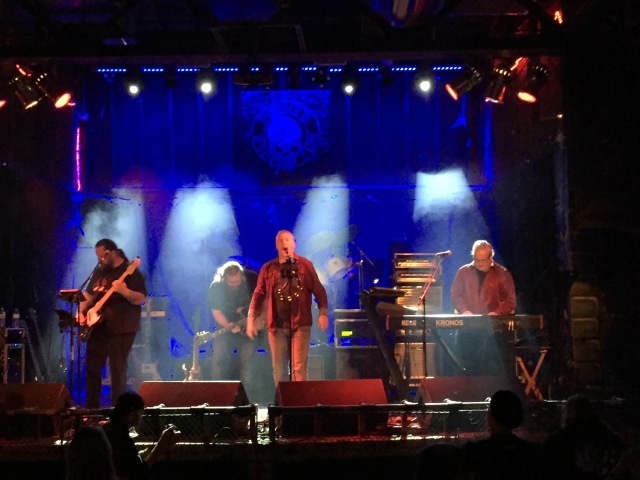 Given their time constraints, ABACAB opted to start with the 1981 Genesis track that gave them their name, then go back, back, back … Jaws dropped throughout the audience as they scaled the challenging heights of And Then There Were Three’s “Burning Rope,” Wind and Wuthering’s “Eleventh Earl of Mar” and the title track from A Trick of the Tail, never originally performed onstage. These choices all had special meanings for me: not only did I play “ABACAB” with my Alma College band The Run-Outs (shout out to Gadz, Jenny, Beef and the late great Joel Kimball), but “Burning Rope” and “Earl of Mar” were highlights of Genesis’ set when I saw them in 1978 at my first rock concert (also my first date)!

And the upward climb continued — Nick D’Virgilio (among his numerous credits, drummer on the final Genesis album Calling All Stations) hopped onstage, taking command to sing “In the Cage” from The Lamb Lies Down on Broadway with flair and power: 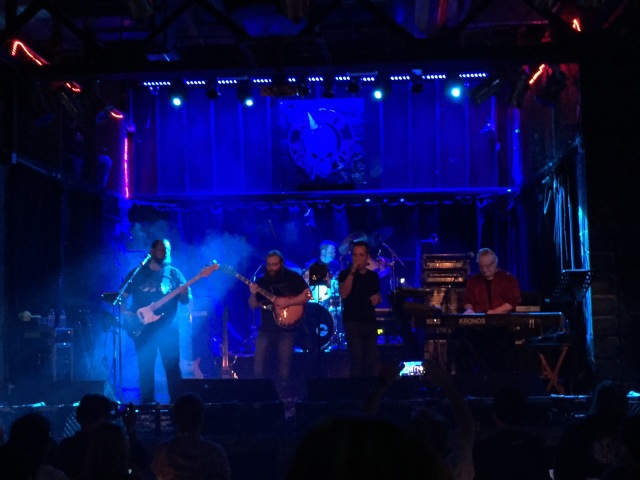 From that point on, ABACAB had the audience completely in their grasp, cruising through highlights of the Peter Gabriel years in high style, then finishing with “In the Beginning” from the 1968 schoolboy album From Genesis to Revelation. Singer Pete Lents, bassist/guitarist Cliff Stankiewicz, new guitarist James Nelson, keys man Patrick Raymaker and drummer Matthew Hedrick played with brio and precision throughout, and got an enthusiastic standing ovation for their sterling effort.

Another cool thing about Progtoberfest: how organizer Kevin Pollack draws on the incredibly talented musicians based in Chicago, including many who’ve played crucial roles in the development of jazz, rock and prog. Dinosaur Exhibit was a shining example of that talent on display — a seasoned “where are they now” octet featuring members of area bands The Flock, Aura and The Mauds; the prime draw was violinist Jerry Goodman, best known for his founding stint with John McLaughlin’s Mahavishnu Orchestra. 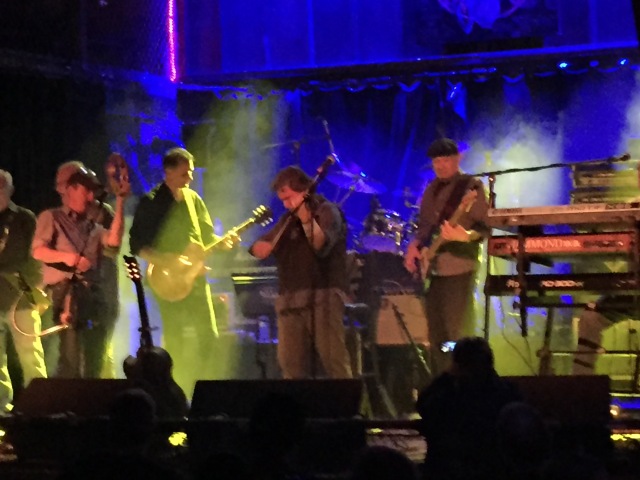 Given Goodman’s pedigree and track record, I’m not sure the Rock Club crowd (including members of Soft Machine leaning back against the soundboard) were ready for the horn-powered blue-eyed soul that kicked off Dinosaur Exhibit’s set. It was driving, vivid stuff , as vocalist Ben Cothran testified with the best and Goodman fiddled up a storm — but you could almost see the “is this really prog?” thought balloons forming over the audience’s heads. The rest of the set (pioneering Goodman fusion originals like “Brick Chicken”, an admirably psychedelic take on “I Am the Walrus” and a viciously swinging “Theme from ‘Perry Mason'” finale) were more in that expected wheelhouse, though, and DE ultimately got the extended applause they deserved.

Which left Neal Morse as the evening’s closer, climbing onstage for a solo set on vocals, acoustic guitar, keyboard, percussion and looping software. As always, Morse was engaging and impressive, using his sonic arsenal to present songs from his new Life and Times, along with impressive takes on solo material (the multi-layered overture/finale sequence from ?), tunes by Transatlantic (“Stranger in Your Soul,” an impromptu “We All Need Some Light”) and Spock’s Beard (“Thoughts Pt. I & II,” done entirely with vocal loops). 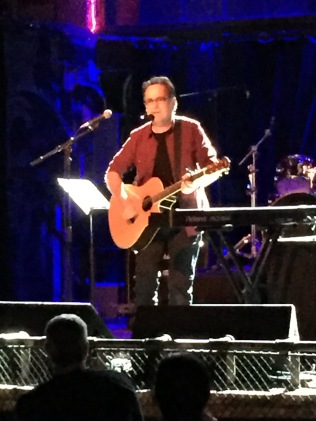 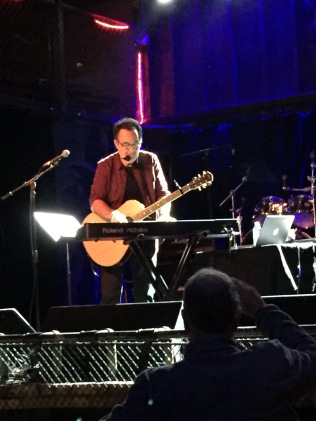 Morse’s improvisatory opener “Songs of Freedom,” incorporating riffs from both Black Sabbath and Yes, established a loose, fun tone for the set — best encapsulated when he brought “Selfie in the Square” to a shuddering halt, then spent 10 minutes pulling tunes by Coldplay, Donovan and The Beatles out of his head, all because he couldn’t help singing the word “yellow” with an British accent! This wasn’t the high-energy, goal-directed path of concept albums like Testimony and The Similitude of a Dream; it was a relaxed, meandering vibe, in keeping with the smaller crowd, the quieter sound palette and the lateness of the hour. It was delightful to catch Morse off his guard and having more sheer fun than usual, with every bit of his heartfelt lyricism and musical brilliance still there for us to enjoy. (After I left to catch the train, Nick D’Virgilio hopped back onstage to harmonize with Neal on Spock’s Beard standards “The Doorway” and “Wind at My Back.”)

The other great part of my Progtoberfest sojourn was catching up with fellow fans I connected with last year from West Michigan, Kentucky, St. Louis, Wisconsin and beyond.  More about that next time, as well as covering the lineup for Day 3 — sixteen bands on two stages in twelve hours.  Stay tuned …

7 thoughts on “In Concert: Progtoberfest 4, Part 1”