The sun shone warmly again on the south side of Chicago as Progtoberfest III kicked off its second day.  Taking in the view as I exited the ‘L’, it was amusing and welcoming to see a familiar screaming face painted on the exterior of Reggie’s:

Hoping to get Alphonso Johnson’s and Chester Thompson’s autographs in the VIP Lounge the night before, I’d struck up a delightful conversation with members of the North Carolina Genesis tribute band ABACAB.  In 2016, festival organizer Kevin Pollack had given them “homework” for this year: to play all of Genesis’ live album Seconds Out on the 40th anniversary of its release.  You could tell the band was nervous (they focus on 1980s Genesis to get bookings, so they had to learn half the album in the past year) but also absolutely thrilled to bring it to the Rock Club stage.  And on Saturday afternoon, they nailed it, to the joy of an enthusiastic, supportive crowd and rave reviews from other acts.  They’re already planning to return to Reggie’s in April as a headliner, and for Progtoberfest IV next October.  Check out why below:

As my festival survival strategy took shape, I decided on a quick walk outside — especially since the old Chess Records building, one of the historic sites of electric blues and early rock’n’roll, was just two blocks away on Michigan Avenue. Great music was made here by so many artists — Muddy Waters, Howlin’ Wolf, Etta James, Bo Diddley, Chuck Berry, even The Rolling Stones, The Yardbirds and early Fleetwood Mac.  Now in the hands of Willie Dixon’s Blues Heaven Foundation, a quick tour of the building provided a lovely little look at a tiny studio that moved the world. 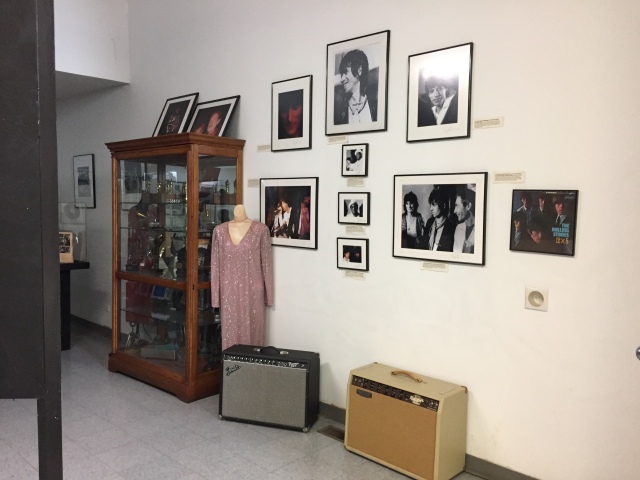 Back at the Rock Club, Wave Mechanics Union took the stage.  Highly recommended by prog saxist Jamison Smeltz, it’s the only big band I’ve ever heard that started their set with Yes’ “Siberian Khatru” and closed with a Jethro Tull medley. In between, they romped through swinging, harmonically sophisticated arrangements of tunes by Queen, King Crimson, Gentle Giant, Pink Floyd, Rush and Tom Waits.  Think Postmodern Jukebox for progressive rock – it was serious fun, audacious and impeccably performed.

Next up was CAST; founded by almost 40 years ago by keyboardist and composer Alfonso Vidales, Mexico’s preeminent proggers wasted no time digging in.  The extroverted septet brought the goods to the excited audience with their polished, passionate, complex epics.  A nice, loud metal edge and the first violin I’d spotted for the weekend added a different spice to the enjoyable musical recipe.

Then it was over to the Music Joint for the first time, to check out Joe Deninzon & Stratospheerius.  They served up gleefully deranged power pop with a gutsy (if sometimes odd-timed) backbeat, including a double time cover of Muse’s “Hysteria.”  And hearing two violins in a row certified that I was at a prog festival, especially as Deninzon made loops with his voice, then channeled them through his souped up fiddle, to make the strings sound like anything but.

Hearing Mike Keneally & Beer for Dolphins back in the Rock Club, I had the unavoidable mental picture of a completely sober driver weaving on and off the road, just for kicks.  Like his mentors Frank Zappa and Steve Vai, Keneally weaves quick snippets of musical normality and nuttiness together; the result, even in a power trio format, is a dense, disconcerting, but oddly enjoyable tapestry.  Oh, and singing while playing keyboards with your right hand and guitar with your left, all at the same time, goes beyond prog right into downright crazy.

Helping out following unavoidable cancellations by other bands, Dave Kerzner took to the stage in the Music Joint for what turned out to be my favorite set of the festival.   Kerzner and band hit peak intensity quickly with Sound of Contact’s “Not Coming Down,” then turned it up for New World’s “My Old Friend” and “Stranded.”  With a few words of tribute to Pink Floyd’s Rick Wright, Durga McBroom took things even higher with a transcendent performance of “The Great Gig in the Sky;” she was completely in possession of the room, doing her family, who came all the way from Detroit to hear her, proud.  And Jamison Smeltz (him again!) hopped onstage to join in a tribute to the late Greg Lake: the complete In the Court of the Crimson King album, which really brought down the house.  An utterly astonishing 75 minutes.

And, at long last, the moment came that had convinced me to take in all three days of Progtoberfest: a quintet version of The Tangent/Karmakanic, playing a double-length set from both bands’ catalogs in the Rock Club.  It was an absolute treat to finally see and hear Andy Tillison’s delightfully sardonic introductions and story songs in person, and to revel in his mind-meltingly good keyboard playing.  Tillison’s animated personality is the perfect match for Jonas Reingold ‘s earnest lyrics, melodic bass playing and bone-dry humor (while a glitch in the keyboard sound was addressed, Reingold told one painfully bad joke after another, reminding us after each one how it was, and I quote, “so funny.”). The set was pleasingly tilted towards longform material, with the whole band shining on “Send A Message from the Heart,” “God, the Universe and Everything No One Really Cares About, Parts 1 & 2” and “Where Are They Now?”

But the most moving moment came at the start of the second set: Tillison quieted the crowd for a new song, “Sanctuary in Music,” dedicated to the victims of recent attacks on concerts in Paris, Manchester and Las Vegas.  And in the middle of the song, thirty seconds of silence, in memory of those who had died, took over.  And held.  And, if only for that moment, eased the pain Tillison (and so many of us) so obviously felt at such senseless loss.

(One further Tangekanic note: the guys in the band really entered into the spirit of the festival.  I couldn’t count how many times on Friday and Saturday I would look around only to see Andy, Jonas or drummer Steve Roberts standing to one side or behind me, checking out yet another act.  They also brought Wobbler front man Marius Halleland — who had had to cancel their appearance when the US turned back the rest of the band at the border — onstage for a number.  Needless to say, they were generous with their time in the VIP Lounge as well.)

Alas, I had to catch the train, so I was unable to stay for Bruce Soord’s acoustic set in the Music Joint.  The version of The Pineapple Thief’s “Tear You Up” that I caught on the way out sounded great, though.

Finally, props to the bands I didn’t get to see on Saturday: Frogg Cafe, The Pneumatic Transit, The Renegades, King Llama and Necromonkey.

You can check out my review of Progtoberfest III’s Day One here.