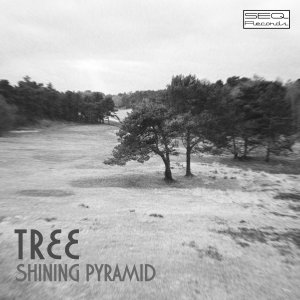 London’s Shining Pyramid released their third album back at the very end of December 2020. This follows 2015’s self-titled debut, loosely based on the 1895 Arthur Machen of the same name, and 2018’s Children of Stones. Their latest album, Tree, was my introduction to the band, as they generously sent me a CD to review. I was hooked from the opening electronic notes, which reminded me a little bit of Oak, who I seem to mention a lot around here. The duo is comprised of Nick Adams on guitars and Peter Jeal on keyboards. A page on their website offers a breakdown of the guitars and keyboards used on the album. I’m not a musician, but I found it interesting that Adams used such a wide array of guitars and basses on the record. They all sound wonderful.

Swirling synths set the stage on Tree, but the spacey guitar quickly steps into the spotlight, taking on a Floydian tone with a bit of the late Piotr Grudziński (Riverside) thrown in for good measure. It would be a mistake to describe this album as only ambient, or only atmospheric, electronic, or space rock. It contains elements of those things, but the guitar keeps the album rooted in rock territory, even if the album is on the sedate side of the rock spectrum.

Perhaps what I like most about Tree is the variety it contains, even though it’s only 44 minutes long. The opening track, “Transmitter C,” centers around a very spacey guitar with electronic synth sounds swirling around it. “Campfire” places an undistorted guitar seemingly just behind the bass in the mix, giving it a bit of a distant feel before the keyboards build and take the main spot in the mix. It isn’t particularly atmospheric. The next track, “Rain,” offers an ambient sound centered on a simple repeated piano refrain. That refrain, along with the bass, serves as a framework to support the varying synth sounds that keep the track interesting as it proceeds. Each track on the record sounds unique. They share common elements, but the band approach them in different ways.

My favorite tracks are “Transmitter C” and “Like Katriona.” They’re both the longest songs on the album, allowing the music to build and grow. They also both feature a spacey Floydian guitar tone and appropriately proggy keyboards. These tracks sound the most musically focused and cohesive as well. A fun fact from their website: the ring of sound waves printed on the physical CD was taken from Adams’ guitar on “Like Katriona.” That’s a pretty cool little thing to throw into the physical product.

I couldn’t help but feel a calming sense of peace when I listened to Tree with undivided attention. The music is calm and almost hypnotic at points. Frankly it was just what I needed. It gives you space to reflect, but it does so with interesting musical textures that make you want to return to it. For those into the atmospheric and ambient sides of prog, give Shining Pyramid a listen. They won’t disappoint.