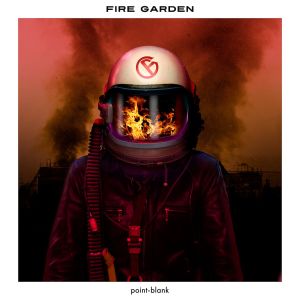 US Art Rockers Fire Garden have returned with a new EP point-blank featuring Adam Holzman (Steven Wilson, Miles Davis) as a special guest on keyboards. “Collaborating with Adam was a great experience, his work has put a new life in my songs,” says Zee Baig, the mastermind behind Fire Garden.

“Idiot Brain is the first thing I came up with when writing point-blank. I wanted to write about current issues, and the songs on this EP reflects what is happening in the current world as artists are struggling, and we human are fighting global challenges like racism, climate change, and pandemics like Covid-19.”  Zee reveals.

The album artwork was designed by Carl Glover (Porcupine Tree, Steven Wilson). “The artwork summarizes the idea behind the music perfectly, point-blank is the most expansive music that we have put out there,” Zee added.

Released on June 26, 2020. point-blank contains 3 original and 2 bonus tracks, it is available on CD and digitally on all streaming platforms. CDs can be purchased from Fire Garden’s Bandcamp page http://firegardenmusic.bandcamp.com

Following is the point-blank tracklisting

Fire Garden, an innovative and melodic rock band from Chicago, is the brainchild of Pakistani American songwriter and musician, Zee Baig. Since 2011, Zee has released a pair of EPs and a pair of full-length records under the Fire Garden name, each featuring a cadre of notable guest artists culled from particularly well-respected progressive rock acts (like Dream Theater, Spock’s Beard, Steven Wilson, and more) and backed by a few of Baig’s musician friends and bandmates from the Chicago area.

Enjoy!  Excellent music, and great to see these guys perform.

What a year.  I would guess that when historians look back to 2016, they will see it as a year of extreme violence and angry populism.  Sadly, both the violence and the politics revealed themselves from time to time in the prog world, but not detrimentally so.

Life, dignity, and art remain, however, no matter what the politicians scream.  And, praise the Lord we have good music to heal so many hurts of this broken world.

Glass Hammer, VALKYRIE.  Not just the best GH album, but one of the greatest rock albums ever made.  Susie has never sounded better, and GH has gone well beyond their comfort level to explore a full-blown novel in this terribly moving story.  This album strikes that perfect—and all too elusive—via media, balancing beauty and innovation.  VALKYRIE is, undoubtedly, my favorite album of the year.

In the next several spots, I have to wrestle with myself.  Frankly, any ranking after VALKYRIE, would change day by day and, perhaps, even hour by hour.  So, I offer the following loves.

END_OF_DOCUMENT_TOKEN_TO_BE_REPLACED

Fire Garden, FAR AND NEAR (2016).  Tracks: Far and Near; There’s Something; A New Day; Life of a Drifter; A Thousand Lost Souls; War and Peace; Faint Shadows; Whitelight; and Diary of a Blood Moon.

One of the single best things about being a hyperfan of progressive rock music is always dealing with the most interesting of people.  When it comes to prog—the musicians, the engineers, and the fans—we’re all basically a bunch of OCD perfectionists.  And, I think we understand each other in ways non proggers simply cannot (as in, not constitutionally equipped to do so).  In the nearly ten years I’ve been reviewing music online, I’ve met a number of absolutely fascinating people.  None less so than Chicago’s young master of all that is melodic metal prog, Zee Baig.

The moment I first found Zee’s music—as first sold through his ep, aptly titled THE PRELUDE—I knew I had to reach out to him.  I did, he was responsive, and we pretty quickly established a friendship through email.  We talked about war, tradition, music, kids, art.  You name it, and Zee and I talked about it.  Even though we’re only a three-hours drive from one another, we’ve never actually met in person.  Strange, but true.  And, here’s hoping, someday soon this will be rectified.

Until that glorious moment, I’m more than content listening to Zee’s astounding music.  It, in and of itself, has become a close friend.  The band’s first album, SOUNDS OF MAJESTIC COLORS, has remained in my constant listening rotation since it first appeared in 2014.  There’s no mistaking that the best of Dream Theater influenced and inspired much of the first album, but Fire Garden takes chances that Dream Theater never would.  This is especially true in lyrical content.  To be sure, Fire Garden is no clone of DT.

FAR AND NEAR, Fire Garden’s second full-length album, has just appeared on the market, and it’s a stunner, as strong and as good as anything else that has come out this year.  This is no small praise when one considers how many greats have come out: from Frost* to Glass Hammer to Big Big Train.  FAR AND NEAR stands with those at the very top.

END_OF_DOCUMENT_TOKEN_TO_BE_REPLACED

My apologies for being so quiet for a bit now.  After the great visit by the Reverend John Simms and his beautiful bride, Jude, I’ve been working on tons of things not directly related to music or to progarchy.  Mostly classes and lecturing, but quite a bit of traveling as well.

Yet, at the back of everything, prog keeps reminding me what matters most in the world–hearth, home, kids, my students, beauty, truth, and goodness.

I’ve been rather obsessed with a few albums through the first third of this academic semester: Glass Hammer’s VALKYRIE; Marillion’s FEAR; and SAND’s SLEEPER.  If you’ve not gotten these yet, please do so.  They have  been in constant rotation.

END_OF_DOCUMENT_TOKEN_TO_BE_REPLACED

For those of us who love everything Zee Baig and Fire Garden, REJOICE!  Album no. 2, FAR AND NEAR, is now available for those of us wise enough to have pledged our undying love, support, and devotion to this amazing band through PLEDGEMUSIC.  Reviews and others cool things to follow. . . .

9 songs, 55 minutes, featuring the work and talents of Zee Baig, Jordan Rudess, Jimmy Keegan, and Bruce Soord.  I get the feeling everyONE wants to hang out with Zee. 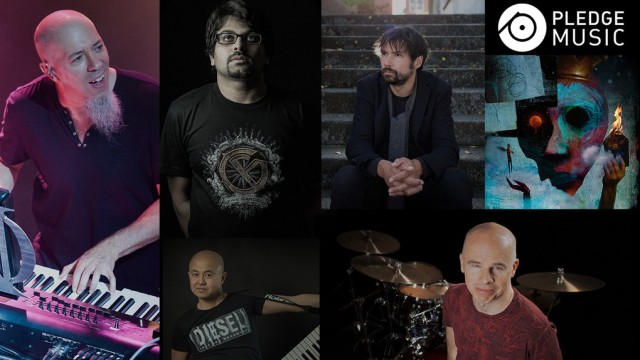 Chicago based progressive rock act Fire Garden is pleased to announce the guest appearance of virtuoso keyboardist Jordan Rudess (Dream Theater) on their second full length release ‘Far and Near’. The record also features Jimmy Keegan of Spock’s Beard on drums and many others. The album is mixed by Bruce Soord (The Pineapple Thief) and the artwork cover is designed by Travis Smith (Opeth, Riverside, Katatonia).

The album is going to be released on July 29th 2016 through PledgeMusic platform and can be pre-ordered with special exclusives at http://www.pledgemusic.com/projects/firegardenmusic

Fire Garden’s mastermind Zee mentions, “It’s a great honor for me to work with Jordan Rudess. He is a legend and I have grown up listening to his music and watching him play throughout the years. It’s surreal, and at the same time amazing to see his personal touch on my music.”

Fire Garden is a progressive rock project by Zee Baig from Chicago. The band has released one EP, ‘The Prelude’ in 2012, and one full length record, ‘Sound of Majestic Colors’ in 2014. The brand new album, ‘Far and Near’, is more personal and exploratory in nature, and is ready to release this summer. The band is also ready to hit the road to support the new album.

Contact: Get in touch with Zee at info@firegardenmusic.com for bookings, interviews and promos. 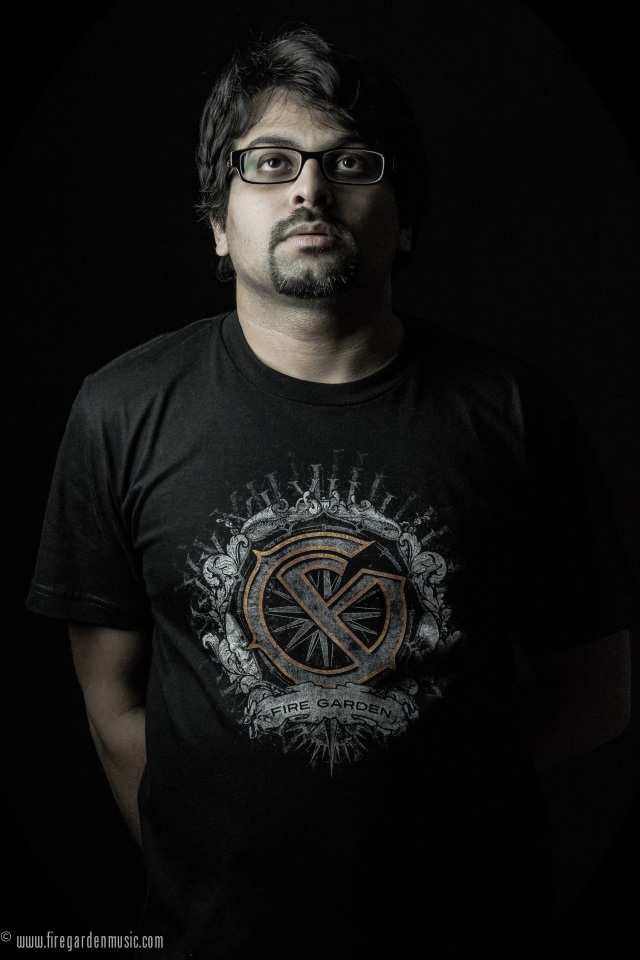 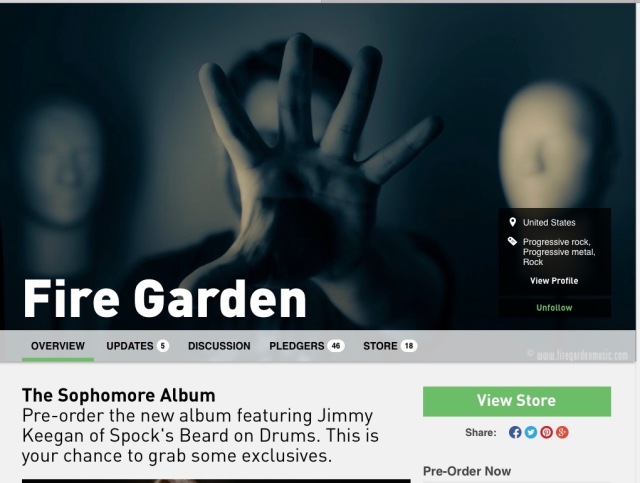 One of my favorite musicians (and an incredible man of integrity and friendship), Zee Baig, has just announced a pledge campaign for his mighty and as-near-as-perfect-in-this-world progressive band, Fire Garden.

I give you my fullest and most complete and bestest encouragement to pledge!

Zee is worth it.

Zee’s art is worth it! 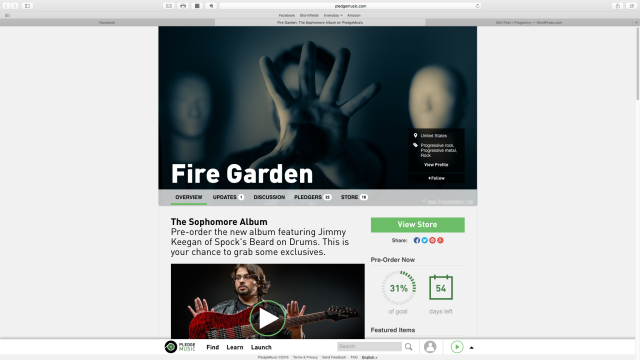