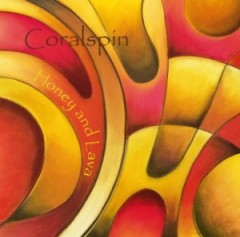 Coralspin, “Honey and Lava,” (Altrospire, 2012).  New on the prog scene, Coralspin hails from England.  Much of the music on this excellent release has the feel of something Trevor Horn or Trevor Rabin might have produced around the time of Yes’s 1984 MTV masterpiece, “90125.”  Certainly, Coralspin has its roots in the early to mid 1980s, especially with its big guitars and its big keyboards.  Whether one likes the music of Horn or Rabin or not, no one could honestly dispute the audiophile proclivities of each man.  The same can be written of Coralspin’s Blake McQueen.  The production of this album is simply stunning–this hit me from the first moment I put it in my cd player, and it continues to impress me with each listening.  It’s not just the keyboards and guitars that stand out , no matter how much they predominate on most of tracks.  The bass and the drums are crisp, offering this album a much more punctuated and professional feel than some of its 80s ancestors.  Indeed, I wish Horn and Rabin would’ve mixed Chris Squire’s bass at this level on 90125.  Amazingly enough, almost all of Honey and Lava was recorded in McQueen’s home, and he later mixed and engineered it.  He’s, simply put, a master audiophile, in the same league with Steven Wilson or Rob Aubrey.  The lyrics on this album are wonderful as well–mythic, pointed, hard, soft.  Everything has its place, and its place is very good.  If I were forced to make a comparison (and, as far as I know, I’m doing this out of my own free will), I would compare Coralspin to The Reasoning.  There’s the obvious fact that the lead singers of each are women, but the comparison between the two is much, much deeper than what some silly academic might have pronounced twenty years ago as worthy of revelation.  The structures of the songs–as approached by Matt Cohen and Blake McQueen–have a definite similarity.   Both love mythic lyrics as well, and each wisely uses the voice not only to convey the meaning of the lyrics but also to convey the meaning of the very music itself.  For what it’s worth, I’m a very proud owner of Honey and Lava, and I eagerly await the follow up.