My favorite Rush album has been, at least going back to April 1984, Grace Under Pressure.  I realize that among Rush fans and among prog fans, this might serve as a contentious choice.  My praise of GUP is not in any way meant to denigrate any other Rush albums.  Frankly, I love them all.  Rush has offered us an outrageous wealth of blessings, and I won’t even pretend objectivity.

I love Rush.  I love Grace Under Pressure. 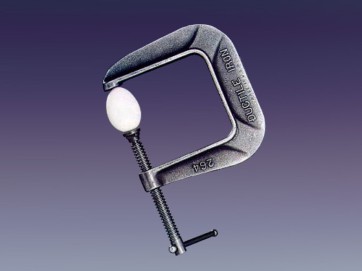 I still remember opening Grace Under Pressure for the first time.  Gently knifing the cellophane so as not to crease the cardboard, slowly pulling out the vinyl wrapped in a paper sleeve, the hues of gray, pink, blue, and granite and that egg caught in a vicegrip, the distinctive smell of a brand new album. . . . the crackle as the needle hit . . . .

From the opening wind-blown notes, sound effects, and men, I was hooked, completely.  I had loved Moving Pictures and Signals–each giving me great comfort personally, perhaps even saving my life during some pretty horrific junior high and early high school moments.

But this Grace Under Pressure.  This was something else.

If Moving Pictures and Signals taught me to be myself and pursue excellence, Grace Under Pressure taught me that once I knew myself, I had the high duty to go into the world and fight for what’s good and right, no matter the cost.  At sixteen, I desperately needed to believe that, and I thank God that Peart provided that lesson.  There are so many other lessons a young energetic boy could have picked up from the rather fragile culture of the time and the incredibly dysfunctional home in which I was raised.  With Grace Under Pressure, though, I was certainly ready to follow Peart into Hell and back for the right cause.  Peart certainly became one of the most foundational influences on my life, along with other authors I was reading at the time, such as Orwell and Bradbury.

Though I’m sure that Peart did not intend for the album to have any kind of overriding story such as the first sides of  2112 or Hemispheres had told, GUP holds together as a concept album brilliantly.

The opening calls to us: beware!  Wake up!  Shake off your slumbers!  The world is near its doom.

Or so it seems.

Geddy’s voice, strong with anxiety, begins: “An ill wind comes arising. . .”  In the pressures of chaos, Pearts suggests, we so easily see the world fall apart, ourselves not only caught in the maelstrom, but possibly aggravating it.  “Red Alert” ends with possibly the most desperate cry of the Old Testament: “Absalom, Absalom!”  Certainly, there is no hope merely in the self.  Again, so it seems.

The second song, gut wrenching to the extreme, deals with the loss of a person, his imprint is all that remains after bodily removed from this existence.  Yet, despite the topic, there is more hope in this song than in the first.  Despite loss, memory allows life to continue, to “feel the way you would.”  I had recently lost my maternal grandfather–the finest man  I ever knew–before first hearing this album.  His image will always be my “Afterimage.”

It seems, though, that more than one have died.  The third song takes us to the inside of a prison camp.  Whether a Holocaust camp or a Gulag, it’s unclear.  Frankly, it’s probably not important if the owners of the camp are Communists or Fascists.  Either way, those inside are most likely doomed.  Not only had I been reading lots of dystopian literature in 1984 (appropriate, I suppose, given the date), but I was reading everything I could find by and about Solzhenitzyn.  This made the Gulag even more real and more terrifying.

Just when the brooding might become unbearable, the three men of Rush seem to offer a Gothic, not quite hellish, smile as the fourth song, “The Enemy Within” begins.  Part One of “Fear,” the fourth track offers a psychological insight into the paranoia of a person.  Perhaps we should first look at our own problems before we place them whole cloth upon the world.

Pick needle up, turn album over, clean with dust sponge, and drop needle. . . .

Funk.  Sci-fi funk emerges after the needle has crackled and founds its groove.  A robot has escaped, perhaps yearning for or even having attained sentience.  I could never count how many hours of conversation these lyrics prompted, as Kevin McCormick and I discussed the nature of free will.  It’s the stuff of Philip K. Dick, the liberal arts, and the best of theology.

More bass funk for track six and a return to psychological introspection, “Kid Gloves.”  But, we move out quickly into the larger world again with the seventh track, “Red Lenses,” taking the listener back to the themes of paranoia.  When the man emerges for action, will he do so in reaction to the personal pain he has experienced, or will he do so with an objective truth set to enliven the common good?

In the end, this is the choice for those who do not lose themselves to the cathode rays.  Is man fighting for what should be or he is reacting merely to what has happened, “to live between a rock and a hardplace.”

Unlike the previous albums which end with narrative certainty, Grace Under Pressure leaves the listener with more questions than it does answers, though tellingly it harkens to Hemingway and to T.S. Eliot.

Given the album as a whole, one might take this as Stoic resignation–merely accepting the flaws of the world.  “Can you spare another war?  Another waste land?”

Wheels can take you around

We’ve all got to try and fill the void.

But, this doesn’t fit Peart.  We all know whatever blows life has dealt Peart, he has stood back up, practiced twenty times harder, and read 20 more books.  That man does not go down for long.  And, neither should we.

In the spring of 1987, much to my surprise, one of my humanities professors allowed me to write on the ideas of Peart.  I can no longer find that essay (swallowed up and now painfully lonely on some primitive MacPlus harddrive or 3.5 floppy disk most likely rotting in a landfill in central Kansas), but it was the kind of writing and thinking that opened up whole new worlds to me.  My only quotes were from “Grace Under Pressure,” drawing a distinction between nature of the liberal arts and the loss of humanity through the mechanizing of the human person.  It dealt, understandably, with environmental and cultural degradation, the dangers of conformist thinking, and the brutal inhumanity of ideologies.  It was probably the smartest thing I’d written up to that point in my life, and even my professor liked it.

Of course, the ideas were all Peart’s, and I once again fondly imagined him as that really great older brother–the one who knows what an annoying pain I am, but who sees promise in me anyway, giving me just enough space to find my own way.

I’m forty five, and I still want Neil to be my older brother.

27 thoughts on “Wind-blown Notes: Rush and Grace Under Pressure”