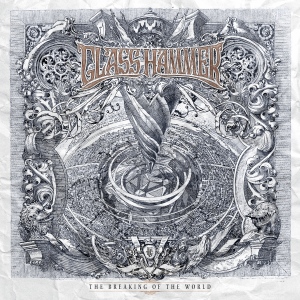 In a recent post, I (belatedly) sang the praises of Glass Hammer’s Ode To Echo. As good as that album is, their latest release, The Breaking Of The World, is even better. Every detail demonstrates this group’s striving for excellence: the beautiful cover reminiscent of Albrecht Durer, the individual photos of the band members, the layout of the lyrics in the booklet, the lyrics themselves, the MUSIC. Glass Hammer exemplifies the definition of arête more than any artist currently active.

From the opening blast of Mythopoeia to the closing bars of Nothing, Everything, there is not a wasted note. The creative fire that gave birth to Ode To Echo has not abated one bit, and one can only hope they continue on this extraordinary run of inspiration.

Highlights? There are too many to list them all, but Mythopoeia is the track I keep returning to. A tribute to J. R. R. Tolkien, it is a paean to divine inspiration that matches its ambition. Veering from some of the hardest rock they’ve ever done to marvelous acoustic sections, this is eight and half minutes of sheer bliss. And how about a shout-out to guitarist Kamran Alan Shikoh! He is masterful on both electric and acoustic instruments.

I also have to mention the incredible work of Steve Babb. Very few bassists can take the lead in a melody while continuing to provide the rock-solid foundation necessary to propel a band. Babb makes it look easy; he is one of the most inventive bassists I’ve ever heard.

Finally, we must recognize the enormous contribution Carl Groves makes. In my opinion, he is the best male vocalist Glass Hammer has ever had, and his lyrics are delightful. Bandwagon skewers the hypocrisy of our age of social media:

“We care!” Isn’t that what you said from your ocean-front home?

I know it’s got to make you feel so much nicer.

Groves’ clever use of paradox in Nothing, Everything would make G. K. Chesterton proud.  In a lament on the brevity of human life and humanity’s short memory, he sings,

The light that unthreads all our webs of doubt

It’s been said that Glass Hammer is heavily influenced by the sound of classic Yes. They are light-years beyond being influenced by any group’s sound. They have forged their own unique sound, and it is brimming with unquenchable confidence. May they never abandon their quest for perfection.

6 thoughts on “Glass Hammer Nails Down a Masterpiece”