Hello Progarchists, welcome back to the second part of my look at the current releases from our friends over at the naughty pachyderm, today I have a review and an interview with Mike Kershaw.

Self taught singer songwriter Mike Kershaw has been working solo for several years now putting out releases that have got better and better, and more acclaim with each release, and his latest album What Lies Beneath (the follow up to 2014s critically acclaimed Ice Age) is Mikes first full length album since signing to Bad Elephant, and Mike was kind enough to chat to me about the album, before we hear from the man himself, lets see what I thought of What Lies Beneath.

This is the second release that Mike has made using guest musicians, and like the previous EP (Departure) signposts a new direction of Mikes working, instead of being fully solo, he has opened the doors and invited in a list of talented musical collaborators and label mates, including the inimitable Tom Slatter, who adds his unique sound to Wounds, whilst Leopold Blu-Sky of Unto Us adds his bass,guitars,keys and drum programming to the mix as well as producing the record, Gareth Cole plays guitar on the album whilst Fractal Mirrors Frank L Urbaniak drums on a few tracks and Leo Koperdraat co-wrote and guests on Two Eyes.

Mikes previous albums have always focused on his keyboard and vocal sound, and whilst this is unmistakably a Mike Kershaw album, the addition of extra musicians and co-writers help move Mikes sound into a new arena.

As a writer Mike has progressed through his previous albums (This Long Night & Ice Age are highly recommended) and the songwriting on What Lies Beneath is a joy to behold, from the powerful opener of Gunning for the Gods with its trademark Kersh keyboard riff and the powerful driving drums provided by Joshua Liebowitz (of Leibowitz) as an opening track it’s a cracker, and with the full band kicking in it’s a statement of intent if ever there was one. Working with a broader musical palette has obviously inspired Mike, as the sound on this album is much broader and deeper, and he takes full advantage of adding talents equal to his own to the sonic patchwork.

Two Eyes, with its distinctive slide guitar, and Leo Koperdraats vocals blending perfectly with Mikes is a case in point, it’s melodies are pure Fractal Mirror, yet its conception and performance is pure Mike Kershaw, a point of musical perfection when the ingredients in the melting pot turn into aural gold. Wounds with Tom Slatter is a collaboration from two totally different areas of the genre, with Mikes prog meeting Toms steam punk aesthetic, and whilst it seems on paper an unlikely collaboration, it works and fits the mood of the album perfectly.

Mike as a performer has progressed with every album he’s released, and What Lies Beneath is one of those albums that allows space for the songs to grow, and for Mikes lyrics to shine. His choice of musical collaborators is inspired, and they all add something extra to the mix to make this a mighty fine record indeed and another superb release from BEM.

I grabbed some time recently to have a chat with Mike about What Lies beneath, having met Mike several times at Eppyfest and shared a beer or two with him, it was good to catch up and get his insight into the new record.

This is your first release on Bad Elephant Music (BEM)

‘We’d talked before, I’d had a conversation with David Elliott about Ice Age, he passed on that but mastered both that and Departure, and he liked the development and the people I was starting to work with and wanted to work with me.

Being on a label gets the music out there and has worked out quite well, we get on really well, when we were getting close to the deadline for release I found finishing it off quite tight, and needed to remind myself that I wasn’t just making this for me, and so next time I will give myself more time to work on it’

The biggest difference between this and Ice Age is the collaborators,

‘When I put together the credits, I credited the guys with the co-writes, as although I wrote the framework they added more to it, especially Leo (Blu-Sky) with his production and the way that Leo and Gareth (Cole) have developed melodies for the work, it’s much more of a band album.

Originally Leo was going to play bass, then he asked to mix it, he knows he’s on about and it was nice to have someone else offer an opinion and say ‘this isn’t right’ and as the process went on it seemed to work.

I thought that I’d gone as far as I could on my own, and felt that I was starting to repeat myself, one thing I really don’t like is when bands produce albums and the latest release sounds like the last one, and I wanted room to grow and develop.’

Hence the Departure EP title, a move away from the old sound?

‘You’re the first one to get that, yes that was the meaning, however the EP was only a partial move, only the last two tracks were collaborative.

Finding collaborators was an automatic process, having been involved in social media, Gareth got in touch and said he’d like to do something, I sent him the outline for Farewell, the lead track from Departure and his guitar was perfect and we clicked and decided to continue working together.

I was online on Tonys House of prog chatroom and said I needed a bassist, and Leopold (Blu-Sky) said I’ll do it. Frank (L. Urbaniak) from Fractal Mirror worked on Departure and Leo Koperdraat (Fractal Mirror) also wanted to be involved, so I sent him Two Eyes and he delivered a great upbeat pop song, which is something different for me. (Fellow BEM artist) Tom Slatter wanted to collaborate, so I sent him the piece and he wrote his lyrics and it developed into Wounds.

It all flowed and came from people that wanted to work with me, it formed into a core band and hopefully next time we’ll have just the one drummer.’

Is the aim to use the band to do live gigs?

‘We’ve talked about it once Leo (Blu-Sky) has recovered from his health issues and finished the project he has with his wife Alyson (Garden of Live Flowers) then we can rehearse remotely with the aim of hopefully being able to play festivals eventually, wherever we can get a gig. I think it will probably be next year now even if it’s only a few gigs.’

So tell me about What Lies Beneath…

‘Theres no theme this time, I tend to write a lot of lyrics in advance, then when I go into writing mode I’m contstantly writing, some are on the piano and then add lyrics after. I tend to find I write one song and then it flows for an album, and the shape of tracks, particularly with having two tracks from different people.

The two ‘City’ tracks are connected, they were intitally the core tracks for me, and I built the album around it.’ 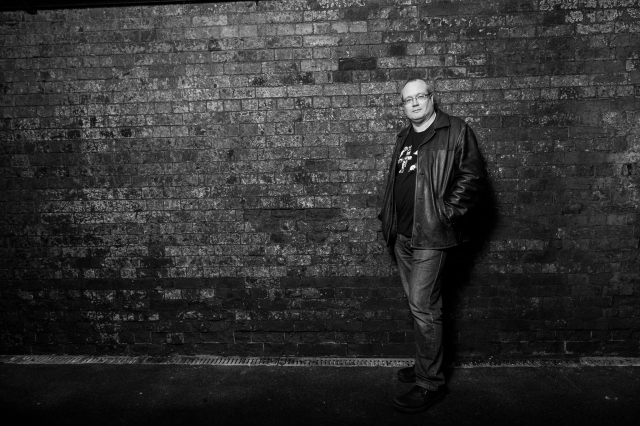 How did you come to making music,

‘I didn’t start at school, the first time I did anything I was 43, out of work and had a bit of kit that cost £19.99, no keyboard, no microphone and some loops and went to work, using lyrics to try and creat music, it’s a record that no-one will ever hear! It’s truly awful but I got the bug, I bought a bigger keyboard and better system and kept moving on. I had never played anything before, I’d had an extremely busy immersive job and then when the job went I needed something to do that would tax me. This was perfect, something that would push me to challenge my limits, when you look at a self recording manual it’s all acronyms and when you find out what it means, it’s more acronyms so it’s difficult to do smoothly without understanding the instructions.

My first demos were in 2008, then two Relocate to Heathrow albums in 2009, the first one was rubbish, but the second one was better. Then I had a job for 14 months, and then we had Owen so I stopped work to look after him’

Are any of the older albums likely to get spruced up?

‘Some of them are good and if I have the time I would like to rework them, so it’s possible I may revisit them, but I prefer to look forward rather than back. I’m thinking of an EP next, I’ve got 4 complete songs written and three on the go so it’s just a question of an EP or a new album. The new material is a lot darker than What Lies Beneath, the new material has a track called Al that Matters is the Fear sung by Stu Nicolson from Galahad, it was due to go on What Lies Beneath but felt that it needed restructuring and we ran out of time to get it on there, as a result I’ve written more songs around it, it was originally the Fear quartet plus epilogue. Current events have featured in two of the tracks, I don’t think that current events have changed my views, because we all know this unplesantness is whats lurking beneath. It won’t be out this year though, it will be into next year.’

Whats the reception been for What Lies Beneath?

Its been quite positive, there have been some nice reviews, some positives and some reasonably written negative reviews as well as some vitriolic attacks. It’s a balance, it everyone is gushing I am not sure that’s reality. On the whole it’s been a positive response. There have been some nice personal messages from people who’ve bought it as well. At the end of the day as a band we’re happy with the album and BEM are happy. You don’t write the music for good reviews, it’s up to us to make it the best album we can. When I started this I never dreamt in my wildest dreams that I would be on a label, I do my best within my limitations and always want to continue doing my best’

2 thoughts on “What Lies Beneath – Bad Elephant Special part 2, an interview with Mike Kershaw.”