I seem to have spent most of the last few months catching up with a backlog of album reviews that have landed either on my door step or in my inbox which built up during a traumatic move, (I am never spending two weeks sleeping in the living room again!!) and so I fear this latter part of the year has been chasing my own tail, as whilst I’ve reviewed older albums, never ones have appeared!

My new Years resolution is to be more organised (honest!)

This is my first word on Bad Elephant Music this year, wrapping up some of their fine releases last year. 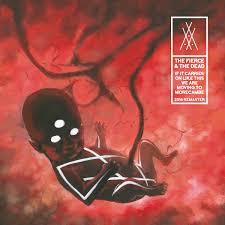 The Fierce and the Dead: If it carries on like this we’ll be moving to Morecambe

This is where it all began, and what better place for a shiny new remastered edition of TFATD debut long player to be released, complete with new artwork by Mark Buckingham, than their new home. BEM and TFATD have become synonymous with adventurous and eclectic music, and as some one who previously bought the original release from band camp, the remastering is absolutely superb, and does make a difference to the sound. Not that there was ever anything wrong with the production originally, but it’s like the difference between watching your favourite TV show on a normal telly and then switching to HD, it highlights certain nuances and little pieces of music on the album that you might have missed originally.

As you probably know the band were formed back in 2010 as a spin off from work on Matt Stevens album as a trio of Matt, Kev Feazey and Stuart Marshall, and this debut was originally released in 2011.

Featuring tracks that started to embed the sound of TFATD like Flint, the absolutely superb Part 2 with it’s driving sound and 10×10, this wonderful remaster also features some bonus tracks, alternative versions of Landcrab, and Part 2, which show how the sounds evolved, a remixed version of Andy Fox, and a live performance of Andy Fox recorded in 2014 when Steve Cleaton had joined to add his guitar sound to that of Matts and create the definitive TFATD line up that has evolved into the mighty wall of sound that we know and love today.

This is a fantastic debut, which showcases the trios power, and signposted where their instrumental musical journey would start to take them, and us.

Full of riffs, licks and kicks it’s a great way to remind ourselves why TFATD are such a popular live act, and compare how their music just keeps on giving.

A welcome re-release of a much-loved album.

The Gift Why the Sea is Salt

2016 see’s the third release from London based prog band The Gift and they are now into their third line up as well and the band are now a tight knit unit of Mike Morton on vocals, David Lloyd (guitars and backing vocals) Leroy James (guitars and backing vocals) Stefan Dickers (bass) Gabriele Baldocci (piano and keyboards) and Neil Hayman (drums & percussion) with a couple of special guests of the ilk of two ex Genesis guitar men Steve Hackett and Anthony Phillips who both lend their unique sounds to The Tallest Tree accompanied by Peter Jones on Irish Whistle.

The album is just under and hour long, and has only 6 tracks on it, so we are talking proper old school prog here, and The Gift have never been shy about admitting their influences and where they were inspired to make music from, however this album which follows on from 2014’s Land of Shadows, and as the band has expanded and become tighter due to a number of highly acclaimed live performances, so too has their scope and sound.

Mike has never sounded better on vocals, and his vision is ably matched by the musical drive the band has, and with some truly breathtaking symphonic pieces on here, this is an album that deserves your full attention, and rewards you with riches if you give it just that (it has helped me get to work in a morning, and the warmth of the music flowing through my headphones is a real tonic to start the day) there are some fantastic musical moments on here and I will return to these later. However I long to start with the Sweeper of Dreams, an amazingly gothic bit of steamprog that is based on a Neil Gaiman short story and with Mike in fine form

However the albums main focus is on the Sea, with various tracks across the album, with the title coming from Norse mythology where a man wished for a saltcellar but he got too greedy and it flowed into the sea, which is now why the sea is salty.

Gabriele Baldocci is an amazing find for the band and his astonishing keyboard playing flows through the album. Fluid, seamless and powerful, particularly on the opening track At Sea, which with it’s symphonic sound, and it’s nod to old school prog.

The album works so well because everything flows seamlessly and their biggest strengths are their songwriting ability where they focus on the sounds and feel of the album, and because this album is a massive development from their previous album, and as I said earlier Mike Morton has never sounded better, and the band that the Gift have become may have produced one of the strongest albums of last year.