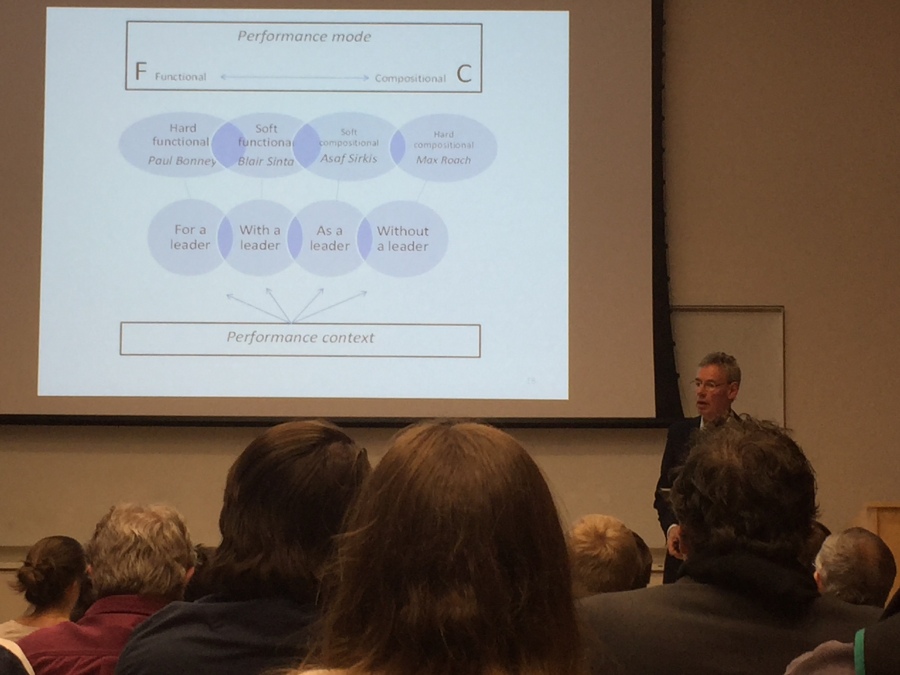 I really was going to write about hearing Bill Bruford’s scintillating lecture “Give the Drummer Some: Distributed Creativity in Popular Music Performance” with a packed house at the University of Michigan’s School of Music.  But stuff happened.

As previewed here, two days after the Bruford lecture I traveled to New York City to perform at Carnegie Hall with the Grand Rapids Symphony & Chorus.  (How’d it’d go? 15 seconds of singing Beethoven’s 9th Symphony on The Today Show, 2300 in attendance on the night with multiple standing ovations, and a solid review from the New York Times — so it was cool.)  This was followed, not just by the renewed demands of workday life, but also by ten days of the death flu (from which I’ve finally recovered).

With all this intervening, the best thing is for you to do is check out Dr. Bruford’s lecture, as delivered last year at Edinburgh Napier University.  My impressions and photos will follow the jump:

What stood out from my perspective:

Bruford’s talk (along with his dissertation Uncharted: Creativity and the Expert Drummer) showed a thorough grounding in, among other disciplines, John Dewey’s philosophy of “art as experience” and studies of “big-c creativity”, especially Mihaly Csikszentmihalyi’s theories of creative systems and flow.  Heavy conceptual lifting, but also intriguing places to start.

To his credit, Bruford quickly brought theory into the practical realm, posing a “Functional/Compositional Continuum” to clarify the creative possibilities inherent in performance, from the “hard functional” recreations of a Pink Floyd tribute drummer to the “hard compositional” innovations of bebop pioneer Max Roach.  (As a bonus, we were introduced to the music of the fine British-Israeli jazzer Asaf Sirkis.)  The research group of drummers Bruford surveyed for his dissertation, including Sirkis, gave their own answers on how they select what to play, construct content that’s different, communicate their experience in art, and assess its significance.  It’s all a marvelously flexible framework to describe how musicians work together — one that Bruford by his own admission wasn’t able to formulate until he had dried up creatively, walked away from performance, and decided to pursue graduate research.

The most fun part of the evening was the Q & A session following the lecture, when Bruford expanded on specific performance examples from his own career.  Just one example: listen to the vocal sections of Yes’ “Long Distance Runaround,” count the number of beats between Bruford’s snare hits — and marvel at how such a simple variation can give a basic 4/4 verse a unique twist and effect every one else’s creative contribution.  In response to a question I posed, Bruford kindly clarified the idea of the ongoing relationship with other musicians, “even when they’re not present.” Potentially, his answer could be very helpful in my own practicing and performance — if I can remember and act on it, that is.

And, yes, Dr. Bruford generously signed copies of his book and other items for his  audience (100-125 people by my rough count) afterwards.  Where I was able to remind him of his performance of Max Roach’s “The Drum Also Waltzes” in the Michigan Union Ballroom, way back in 1984, on a duo tour with Patrick Moraz on piano. 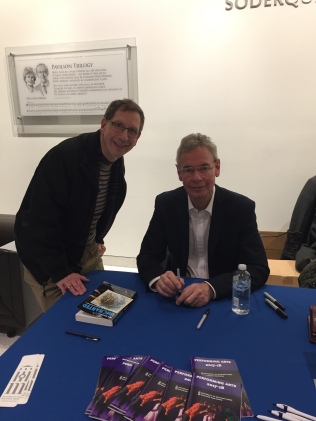 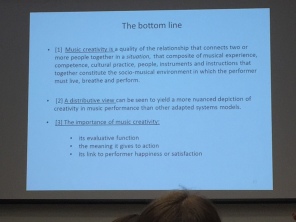 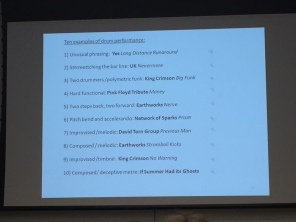 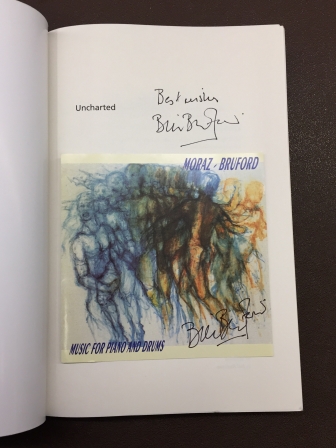 One thought on “Bill Bruford on Creativity”