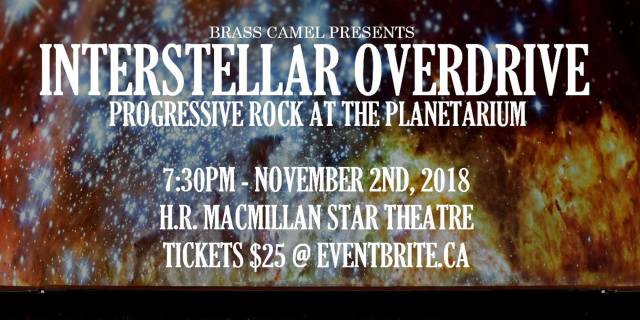 Daniel James’ Brass Camel is putting on a show in Vancouver (tickets now available) with the ultimate in prog rock visual accompaniment. I saw their August 18th show in Vancouver, as an eleven-piece band (including horns and backup singers), at the Fox Cabaret, where they played almost all the tracks from their incredible new album (soon to be available online for digital download), played to the hilt, along with some Sturgill Simpson, Parliament, and Led Zeppelin tunes. The show was a top-notch display of meticulous musicianship.

I can therefore recommend that you don’t miss this future chance to see Daniel James’ Brass Camel live, now celebrating their new release in the grandest of style. The Fox Cabaret show had a volume level that was too loud for such a small venue, so I am hoping they’ll take a page out of Steven Wilson’s playbook and set the volume level at optimal human range for the Planetarium. If you saw Wilson the last time he was in Vancouver, you’ll know what I mean: he does a perfectly crafted multimedia show, with no earplugs required, as he sets the volume level at just the right setting, in order to fulfill every audiophile’s dream. (By the way, Wilson returns again this year to Vancouver.)

Having to use earplugs at a musical event is always a sad situation, just as it would be ridiculous to have to wear a blindfold or sunglasses at a Planetarium show. The promise of prog rock music is that it enhances our sensory experience, not dulls it. I am betting that this November 2nd show will be not just one small step in the right direction, but rather one giant leap for all prog-kind. (Why aren’t more prog bands doing this genius idea??? In any case, Daniel James’ Brass Camel is leading the way.)

The last time I spoke with Daniel, he was trying to secure a set of tubular bells for the November 2nd event. It sure sounds like he’s getting ready to do this right and give Wilson a run for his money! Prog right on, wayward sons.

The Vancouver prog-funk ensemble that calls itself Daniel James’ Brass Camel has conspired to take you on a trip through the universe in Vancouver’s only 360 degree star theatre. Underneath mindblowing visuals, DJBC will be performing a swathe of progressive rock classics by such artists as King Crimson, Pink Floyd, Rush, Genesis, Yes and more. They will be joined by a handful of special musical guests who will join the Camel and lend their talents to this progressive extravaganza.

Alcoholic beverages and light snacks will be available before the show and during the short intermission on the planetarium’s Star Deck.

One thought on “Prog Rock at the Planetarium: Vancouver, Nov 2”