As I exited the CTA Green Line on a crisp, clear Chicago Sunday, Reggie’s Rock Club and Music Joint beckoned with the promise of Progtoberfest’s final day: twelve hours of sixteen bands on two stages. Constantly unfolding delight or endless endurance test? Only one way to find out.

(Notes for after the jump: links are provided to bands’ online presence — website, Facebook or Bandcamp pages — wherever possible.  An asterisk [*] by a band’s name means I bought one or more of their CDs at the event; A cross [+] means the band didn’t have CDs for sale — but their music is now on my want list.  Here we go …)

Fortunately, Reggie’s was ready for me, so I buckled in for the duration, starting with Sonus Umbra kicking off the Rock Club bill.  A last-minute addition due to a cancellation, Sonus Umbra has a rich history: founded as Radio Silence in 1990s Mexico City, now Chicago-based, shepherded through the years by bassist/physics professor Luis Nasser.  Tight and focused, the band slammed through a fine set of attractive, brooding prog metal.  They were up to spec in the “heavy and dark” department, but also served up plenty of contrasting sonic atmospheres, thanks to textural interludes led by acoustic guitar and flute. 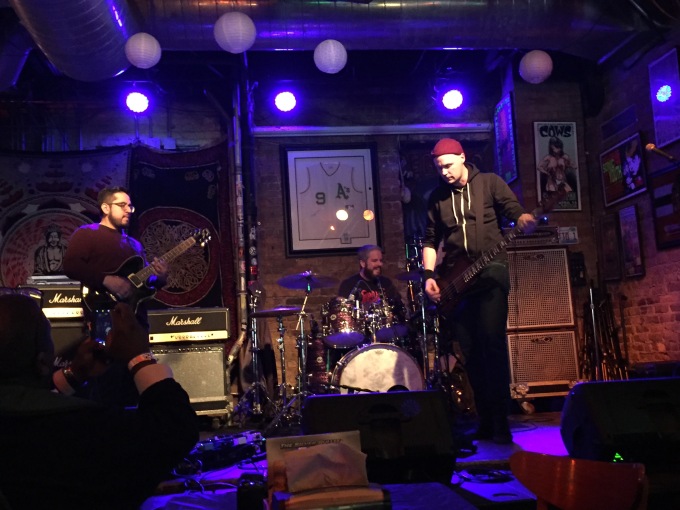 Back in the Rock Club, the debut gig of The Devil’s Staircase showcased both familiar and surprising faces: Sonus Umbra leader Luis Nasser and compatriots, plus Swedish prog mainstay Matthias Olsson (Änglagård, Necromonkey, White Willow) on drums and loops. Launching the set with a bristling take on Gustav Holst’s “Mars the Bringer of War,” this band lived up to their billing as “fractal geometry, chaos and non-linear physics [becoming] music.” There were gripping episodes of ebb and flow, moments of delicate acoustic guitar/bass interplay and plenty of edgy, out there soloing, especially from Ramses Luna on woodwinds, breath-controlled synthesizer & iPad.  It was an exhilarating ride, and my first festival highlight; I eagerly await The Devil’s Staircase’s debut album, currently being recorded.

The Music Joint then served the first major musical contrast of the day with Ovadya.  Traditional Jewish folk music refracted through a psychedelic prism by guitarists/writers/arrangers M Hurley and Noah Mishkin, served up with ear-catching sax/violin work from Linda Wolf, a wicked groove from Chris LeSeuer and Matt Kantor, and Terrence Price’s heroically funky lead vocals?  You bet; tasty stuff!

Little Atlas, Sunday’s first out-of-town act (from Miami, Florida), was next up in the Rock Club.  Steve Katsikas’ lead vocals and keyboards were attractive and lilting in a Dennis DeYoung vein, with bassist Rik Bagai and drummer Mark Whobrey supplying plenty of low end Lee/Peart kick.  In the aftermath of a traumatic physical assault on guitarist Roy Strattman last year (with a sub filling in for this set), Little Atlas’ reunion was a triumph in itself; their optimistic, anthemic epics suited the occasion.

Power trio #2 in the Music Joint: Salt Lake City’s Westward*.  When Andrew Marshall on guitar, Karl Grimm on bass and Matt Morrison on drums promised a set of “cowboy space rock,” they weren’t kidding: their originals unfurled in an engaging haze of big, limber riffs, with plenty of wide open space in the sound.  They were lots of fun — and since I’m a sucker for the “suited and booted” look, Westward won my personal “best dressed” award for the day as well!

Highlight #2 followed in the Rock Club; my notes on Gramps the Vamp’s* set started and ended with “WOW!”  With a name filched from a Scooby Doo villain, the Chicago octet dished up blistering, energetic funk, driven hard by Maxx McGathey’s slick compositions and retro-textured Wurlitzer piano.  The slightly loopy horror soundtrack feel of the tunes and the enthusiastically deployed horn section only added to the fun. 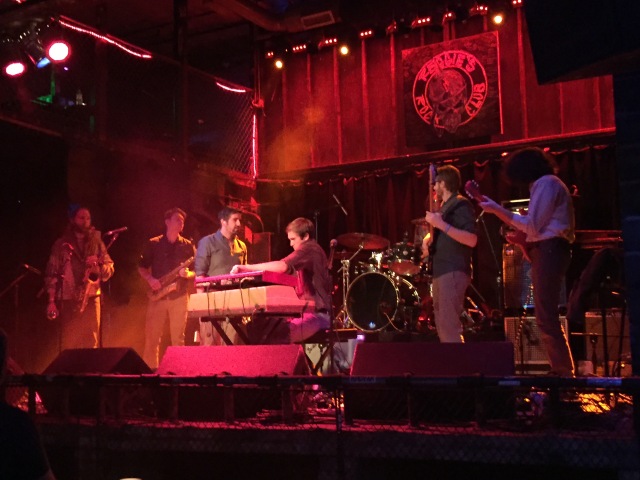 Then, it was back to the Music Joint for ambitious, immersive jazz-rock fusion from Ohio’s Axon-Neuron*. Playing selections from their double concept album, Metamorphosis, the quintet ably showcased the supple mix of Jeremy Poparad’s mind-bending writing and Amanda Rankin’s alluring, theatrical vocal delivery. Almost as much fun was watching the Bears fans who stopped in on the way home from Soldier Field, drowning their sorrows after the loss to the Patriots while occasionally looking up at the stage and going “huh?”

As with last year, the Rock Club served up Progtoberfest’s only entry in my “Not My Thing, I’m Afraid” department: the undeniably talented Chicago Zappa Collective performing their namesake’s utterly, deliberately tasteless and offensive epic Joe’s Garage in its entirety. Yes, Frank was a unquestionable genius — but I can’t help but believe that he internalized his reputation a little too thoroughly.  Who else would deliberately write the dumbest, lyrically crudest rock opera of all time, seemingly aimed at ticking off as many normals as possible?  (All in the cause of freedom and lulz, I guess.) Well, mission accomplished early on, so it was time for a break in the VIP Lounge to check out the buffet and charge my phone …

Back to the Music Joint for Austin’s Aaron Clift Experiment*. This quartet furnished sleek, urgently uptempo tunes, brainy-heading-toward-quirky lyrics, and a taut, controlled sound. Prog smarts and pop appeal combined nicely, especially when the end of the set slipped the leash and rocked out to fine effect.

Italy’s Möbius Strip+ kicked off the evening in the Rock Club; their warm, sunny take on jazz fusion was immediately welcoming, leaning on Soft Machine for structural influences and channeling Chick Corea’s Latin-flavored vibe.  Lorenzo Cellupica (keyboards), Nico Fabrizi (saxophone & flute), Eros Capoccitti (bass) and Davide Rufo (drums) definitely work well together; their sound was propulsive and driving, without being heavy or aggro.  Not sugary smooth jazz by any means; rather a naturally sweet, attractive appetizer for the acts to come.

Lovely Little Girls provided something completely different over in the Music Joint: skronky performance art masterminded by local conceptualist Gregory Jacobsen, with musical direction by bassist Alex Perkolup.  There was a macabre edge to the subject matter and echoes of the B-52s in the tag team vocals; the overall effect was splintery, stuttering, whimsically wicked fun — though it’s a challenge to get a handle on a band where the typical lyrical hook is something like “Be good to your shoes.”

Then, a summit meeting in the Rock Club, as members of District 97 and the Chicago Zappa Collective covered one of my favorite instrumental albums – One of A Kind (now 40 years old!) by drummer Bill Bruford — from front to back.  The ad hoc ensemble  delighted the day’s biggest audience so far by rising to the challenge; everyone shone as the music soared, but bassist Tim Seisser was especially remarkable, winning plaudits from Soft Machine’s Roy Babbington as he nailed Jeff Berlin’s bubbling low-end virtuosity.

The Louisville quartet French TV continued the fusion theme in the Music Joint, with their whacked out, stop and start tuneage;  guitarist Katsumi Yoneda, keyboardist Patrick Strawser and drummer Mark L. Perry nimbly followed bassist/composer Mike Sary wherever he led — sometimes even lying down onstage as part of the trip!

And then, headlining the Rock Club: everything I had hoped for from Soft Machine*.  Fifty years since the band’s founding (and 44 since their last North American tour), this incarnation (John Etheridge on guitar; Theo Travis on reeds, keys and loops; Roy Babbington on bass; guest drummer Gary Husband) proved an accomplished, authoritative, fiery quartet. Throughout their mesmerizing set, they constantly pushed the envelope, whether coming on fast and furious with new material or blissing out on 1970s classics. Experience, mutual trust, utter fearlessness — it was music making at the highest level, playing out right in front of my eyes & ears.  This was what had I come to Chicago for: definitely highlight #3 of the day!

The last band of the festival,Toronto’s FM+, closed the night in the Music Joint.  My apologies to commenter Darren, but sad to say, I only caught FM in passing on the way to my train.  My friends who stayed raved about their powerful set, which paired tracks from their newest album Transformation with the complete 1977 cult classic Black Noise.  What I heard from frontman Cameron Hawkins’ current ensemble was rich, sturdy and impressive, with shimmering sonic surfaces and ample foundational punch.  I definitely want to explore FM’s music more — good thing Esoteric Recordings has picked up their back catalog! 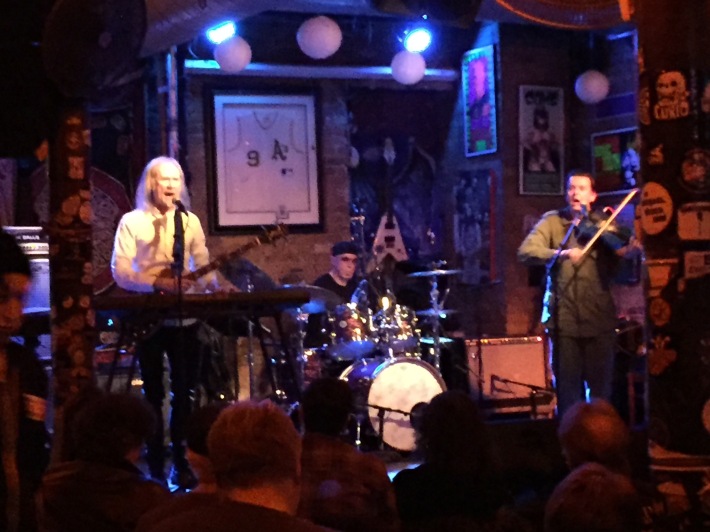 Of course, one of the best parts of live music is experiencing it with fellow fans — whether you meet them before, during or after the show!  Progtoberfest 3 and its aftermath had introduced me to a great Facebook community, and one of the weekend’s highlights was spending time with some of them. Shout-outs go to (pictured below clockwise from the left): Proglodytes’ Thomas Hatton & Cedric Hendrix (author of I Can’t Be the Only One Hearing This!); fellow Michiganders Steve Sly (former organizer for North Carolina’s Prog Day) and his sister Anne; Houstonites Kari Lee & Leo Furman; and Andy Evenson from Wisconsin (not pictured). 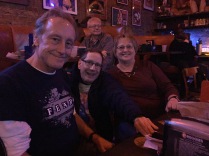 So yeah, Progtoberfest was a great time once again — not as many major acts as 2017’s edition, but plenty of great music to discover and explore courtesy of organizer Kevin Pollack, and nary a band that didn’t belong on Reggie’s stages.  I’m happy that Progtoberfest 5 is already on the schedule for Saturday & Sunday, October 12 & 13, 2019, with a pre-party on the night of Friday, October 11.  Plenty of detailed info will be available after the first of the year at Facebook’s Progtoberfest Official Forum.  See you next October at Reggie’s?

6 thoughts on “In Concert: Progtoberfest 4, Part 2”