I’ve taken the plunge and chosen my top albums of 2012. My top 6 came to me quite quickly. The rest took some time to rank but I finally managed it. I’ve also ‘mentioned in dispatches’ a few other albums that I either like and/or think are worth having a listen to if you haven’t already. 2012 has been a very good year indeed for the Prog world.

No 12 First Stage Zoltan by Zoltan

Wonderful cinematic soundscapes that would make John Carpenter proud. It’s all analogue and sounds great on a good hi-fi system. For lovers of atmospheric film scores.

END_OF_DOCUMENT_TOKEN_TO_BE_REPLACED

From their eponymous titled album released earlier this year, this is a spontaneous blog following the posting of a Youtube link by a few other Echolyn admirers. This is not only my favourite track from the album but it is also one of my favourite tracks of all time. For me there are few songs through which I have had an IMMEDIATE and TOTAL connection. I am not usually a lyrics/song-orientated person as I like getting lost in very long instrumental tracks (typically prog but also classical or jazz). Sometimes I find lyrics (or more to the point singing, particularly bad singing) act as an obstacle to my enjoyment of the quality of the musicianship. However, there is no doubt that a song containing  a combination of wonderful lyrics, a great voice and superb melodies and musicianship is difficult to beat.

When I first heard Past Gravity it literally sent shivers down my spine, in fact my whole body. The lyrics evoked memories and feelings within me that rarely surface. In fact when I listen, especially as the singing reaches a crescendo, I am usually welling up with tears. From the very first line I was hooked….’Love is a ghost in a room when she has turned away into the empty night’…. How many of us have felt this in our lifetime I wonder?

This song transcends music, it is pure beauty. If you haven’t heard it then I really hope you will enjoy it, and if you have, then listen again!

END_OF_DOCUMENT_TOKEN_TO_BE_REPLACED 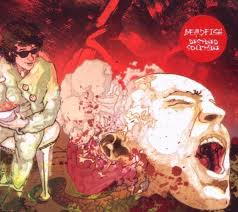 Beardfish are another of the wave of Scandinavian bands to grace us with their music in the last decade or so. Heralding from Sweden they have been around since 2001.

I had heard of the band but never listened to their music. Various people had recommended their latest album ‘The Void’ but I first got hold of one of their earlier albums ‘Destined Solitaire’, released in 2009.

What can I say other than, for me, this has the ‘Wow’ Factor.

Perusing Wikipedia (dangerous I know), they are likened to Genesis and Yes…..mmmmm, not so sure about that………..yes, they are labelled as ‘Prog’ but they are light years away from these Classic Prog bands.  Avant-garde certainly, their imaginations run riot through this album. To me the music conjures up a meeting between Frank Zappa and The Marx Brothers, it’s that zany and madcap. There are an incredible amount of different influences prevalent, from prog through jazz with even some ‘growling’ metal. They are refreshingly unique in a genre where that’s very difficult to be.

These Swedish guys are certainly talented and incredibly inventive. They are the spawn of the Mothers of Invention!

This album is complex and long but rewards perseverance. It took me three listens just to begin to appreciate it and I’m sure that with repeat listening more of its treasures will be revealed.

If you like eccentric,  surreal 70s style music (with a lot of Hammond organ),  I heartily recommended this album.

My journey has just started with this unusual band. Their latest album is winging its way through the Christmas post.  I wait with anticipation.

I was first introduced to Oceansize a few years ago after reading a general review of progressive rock by a devout Catholic (a priest I think, not you Brad!). He discussed a number of albums produced over the last few years that had escaped me and I decided to take a chance on Effloresce.  I purchased the CD with no internet listening beforehand. At first I just didn’t get it; what was this all about? There were too many things going on for my brain to register. It literally blew my mind. I just couldn’t get my head around it. But after about 4 or 5 listens it hit me like a sledgehammer, but in a good way, where pain is pleasure. I have listened to this album so many times it’s stupid really…can one album be so good that I spend so much of my precious time listening to it? The whole album is like a massive earworm to me, I have trouble getting it out of my head after listening to it… trouble sleeping, you bet!

Of all the brilliant tracks on the album, I’ve chosen Massive Bereavement to comment upon because it includes so many of the elements of progressive music that I like.

I read one review saying that Oceansize are like Mogwai meeting Tool and indeed, there are similarities with both. I personally ‘connect’ with the Mogwai sound, Tool not so much, but I believe there is an extra level of musical complexity to Oceansize. I would recommend either a very, very good hi-fi system OR a very good set of headphones to gain maximum appreciation of the complex sound of the band. The ‘inner-ear’ experience is superb.

Massive Bereavement is a stunning track from an album full of exceptional tracks. It’s an awesome debut album and currently in my top 10 of all time. Please, if you haven’t heard them, check out their other three albums, Everyone Into Position, Frames and Self Preserved While the Bodies Float Up. I hope you won’t be disappointed.

Oceansize fit into the edgy, dark and heavy side of Prog but that’s just where I like to be. Intense stuff. Welcome to the dark side J

Massive Bereavement is a superb warm up track for the gym. I’ve developed a special 10 min cycle routine for it. A low rpm start, gradually building up the power to an explosive intensity and climax (Yes I am slightly deranged!).