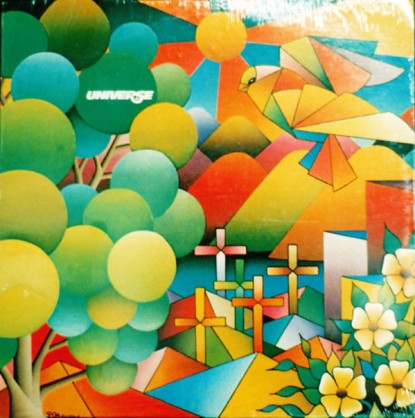 The world of prog is full of surprises. In my search for obscure prog bands I stumbled across Universe. Although not quite as profound or mysterious as the universe we inhabit, the band is by far one of the best in American prog. Mixing the sounds of Hawkwind and Syd Barrett-era Pink Floyd, Universe successfully created their own acid rock sound.  Formed in the mid 1970s in California by Gary Paul Van and Dennis Lee Askew, Universe released one eponymous album in 1977, and what an album it was.  Before you listen to the music, you should dedicate some time to appreciate the album cover in all of its psychedelic beauty.

Notice the dove and the crosses on the cover.  There are religious overtones on this album: “Rock in the Sky” and “Light from Above”, for example, refer to God. But they lyrics are far from preachy, and Van’s ethereal vocals only emphasize the brilliant cosmic vibe. Keys, synthesizer, and guitar dominate, and all are performed with equal dexterity.  Some highlights:

Touchdown features fine acoustic and electric guitar work.  It is the longest song on the album (about 10 minutes) and reminds me of the Yes masterpiece Awaken.

Dream is the “spaciest” song on the album and may remind some listeners of The Beatles’ psychedelic classic Tomorrow Never Knows.

Remember the Stars opens with a bang and transitions with cosmic delight to Light From Above; it is one of the best American acid rock songs I’ve ever heard and my favorite piece on the album.

This is another one of those albums that does not receive the attention it deserves.  Although Universe will appeal mostly to fans of acid and space rock, anyone who enjoys prog will appreciate at least some of the songs here.