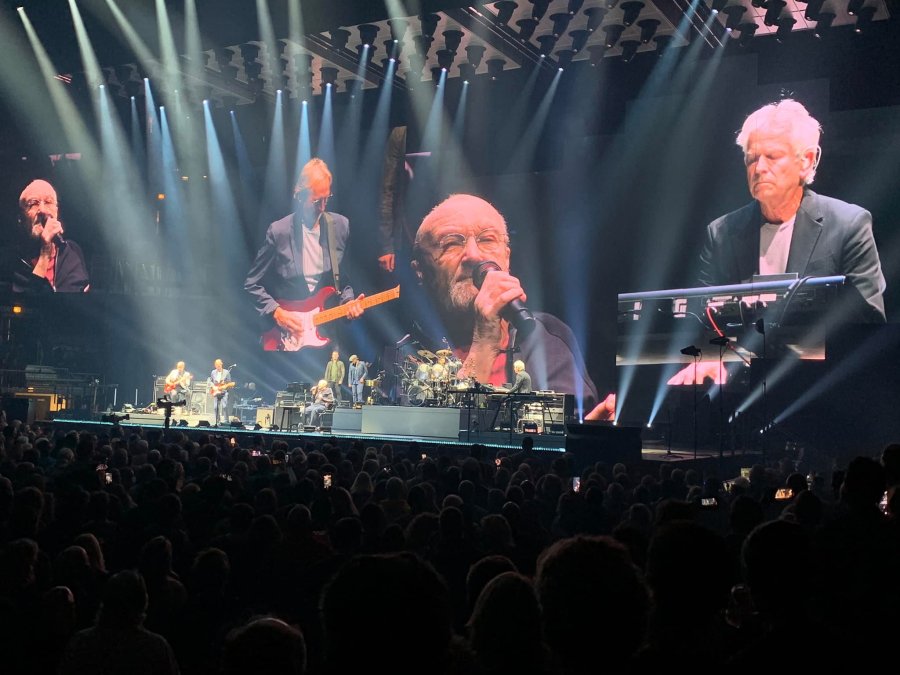 The moment was perfect.  In a blaze of white light recalling their iconic Seconds Out album cover, Genesis kicked off opening night of their North American tour with a rampaging “Duke’s Intro”, the instrumental beginning and end of 1980’s Duke.  And boy, did that one bring back memories as it rampaged.

The impact of hearing 1978’s And Then There Were Three and the ensuing deep dive into Genesis’ back catalog.  Hearing the band live the same year (my first rock concert ever) and being thoroughly blown away by their precision and power.  Seeing them again in 1980 — when, with live guitarist Daryl Steurmer ill, Genesis still put on a great show as a quartet — then in 1981, when they opened with that same arresting fanfare.

Forty years on, I was happy that Genesis still meant business; the players — Tony Banks, Mike Rutherford, Daryl Steurmer & Nic Collins — were firing on all cylinders from the word go, a tight ensemble that already promised each player choice turns in the limelight.

And already sitting at center stage, surveying the scene with a satisfaction that was obvious even to those five rows from the top of Chicago’s United Center, Phil Collins was getting ready to sing.

Throughout the night, the core of the band expanded on the promise of “Duke’s Intro.”  Tony Banks reliably provided the backbone of every tune on keyboards (spanning 1974’s Selling England by the Pound to 1991’s We Can’t Dance), his blithely eccentric harmonies and riffs occasionally coalescing for finger-busting lead lines.  Guitarists Rutherford and Steurmer added the muscle and the nerves, earning audience plaudits for their fine lead work — Rutherford on later extended pieces like “Home By The Sea,” Steurmer for respectfully stating Steve Hackett’s classic solo on “Firth of Fifth” before adding his own jazz-inflected spin.

And as for the necessary heartbeat, young Nic Collins delivered.  He more than rose to the challenge of the drum parts his father created with Genesis, filling the big room with his dexterity and drive, not to mention an enthusiasm that pushed the groove ahead, even while synced to the gargantuan video screens and VariLight show.  No question about it, he elevated the evening.  And from Dad’s occasional air drumming during instrumental interludes like “Cinema Show”, you could tell Phil Collins was proud.

But saying that brings up the elephant in the arena — Phil Collins himself.  Walking slowly to his seat as the show started (aided by a cane) and now completely unable to play drums, Collins is the same age as Banks and Rutherford, but he is also something you just don’t see on rock stages — he is frail, possibly even in pain even as he performs.  In and of itself, that’s been a topic of controversy among Genesis fans.  Some, couching their opinions in tones of dismay or even anger, have opted to stay away, keeping their memories of the glory days undamaged.  Others have seen this purportedly final tour as one last chance to show their love for a band that has given them immense pleasure.

And while I landed in the latter camp the instant tickets went on sale, seeing and hearing Collins in the flesh and on the giant screen shook me a bit.  For a good chunk of the night, he sounded as frail as he looked.  Not only is his voice lower, it’s lost tone and energy; his sound is coarser and more forced, his rhythms ever-so-slightly behind the beat and less crisp.  As the show wore on, he occasionally jumped to the words of a different verse on some songs, quickly glancing down at lyric sheets on a side table to reorient himself. So Collins’ frailty wasn’t behind the lines — it was on display for the whole audience to experience and process as he fought it.  (Beforehand, I had already found this piece comparing the recent fates of Collins and Johnny Rotten refreshingly iconoclastic, bracingly realistic and strangely moving. It resonated even more in the aftermath.)

“Stop waffling! How did it sound?”  Well, Collins frequently struggled to match the group’s firepower; especially on later tunes like “No Son of Mine” and “Domino” his ad libs simply sat there instead of building along with the big instrumental climaxes.   Without the zip he could bring during Genesis’ imperial phase, he couldn’t overwhelm us with his attack anymore.  Instead, he had to rely on determination, craft, personality and a bit of cunning (as well as on his colleagues) to carry the night forward.

And when Collins used those tools — well, those were the special moments.  In my ears, the magic happened most when the band tackled their pre-superstar catalog: a majestic “Afterglow” where Collins didn’t force the point and just sang tenderly (aided by backing vocalists Daniel Pearce and Patrick Smyth, along with a visually stunning display of lights and dry ice).  A brief front stage set that included two verses of “The Lamb Lies Down on Broadway” and ended with the relaxed sentiment of “Follow You Follow Me” (the arena lighted by fans waving their cell phones).  The comic shtick of “I Know What I Like”, where Collins really did sound like a British curmudgeon who happened to mow lawns, then rhythmically bashed his knee, elbow and head with a tambourine for dessert.  You could tell that for Collins — and for the audience — those moments were worth the price paid in getting there.  In return, the crowd sat themselves in the palm of Phil’s hand, joyfully participating in every goofy “Genesis party trick” he pulled out of his back pocket to get them cheering.

Ultimately, the last leg of the show embodied its overall strengths and weaknesses.  While “Tonight, Tonight, Tonight” was a moody, atmospheric delight, “Invisible Touch” and the first encore “I Can’t Dance” fell a trifle flat (despite the crowd’s joyous yelps of recognition).  Then, gathering himself for one last time, Phil struck up the delicately sung intro to “Dancing with the Moonlit Knight”, quieting more than 15,000 people in an instant. Which led to a deeply moving final singalong on “The Carpet Crawlers”, the group locking into place, gliding forward to Nic’s gently insistent percussive pulse.

So, what if the above doesn’t appeal? If you want to hear an incredible simulation of Genesis in the era when Peter Gabriel fronted the band and they were at their most progressive — well, I definitely recommend The Musical Box (who are already announcing The Lamb Lies Down on Broadway dates for 2022).  If you want to hear prime cuts of 1970s Genesis seamlessly recreated by one of the men who made it happen — well, I’m already planning to catch Steve Hackett when he tours the complete Seconds Out album next spring.  You may or may not think paying premium prices to watch Phil Collins’ public struggle with what he did effortlessly for decades is a great idea, even surrounded by his son and his longtime musical friends on Genesis’ The Last Domino? tour.  (Although it’s worth noting that reports from the fall UK tour had Collins’ singing getting stronger as the concerts continued.)

But if you go, what you’ll get is a solid, enjoyable evening of big hits and deep cuts — hopefully laced with the genuine transcendence I experienced as well.   And you may also see and hear how, in a broken world where frailty and pain comes to us all, a beloved mega-band and its fans can find ways to wish each other a thankful hail and farewell.

— Rick Krueger. Thanks to Jayce Darrah of Misgivings Fall for the lead photo!